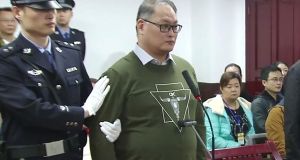 A Chinese court has sentenced Lee Ming-che, a human rights activist from Taiwan, to five years in prison for subverting state power, sparking an angry reaction on the self-ruled island.

Chinese national Peng Yuhua was sentenced to seven years on the same charge, according to the website of the intermediate people’s court of Yueyang city in Hunan province, and both men have said they will not appeal.

The island has closely watched the case, and local media did live updates. The presidential office said the sentence was “totally unacceptable” and had “seriously damaged” relations across the strait of Taiwan.

Mr Lee, 42, is a teacher who has a high profile in Taiwan for his pro-democracy and rights activism and he has links to Ms Tsai. He disappeared under mysterious circumstance after crossing into Zhuhai in southern China from Macau in March and authorities confirmed that month he was being probed on suspicion of attempting to subvert national security.

The court said it had granted leniency because Mr Lee and Mr Peng had made “honest confessions” to attacking and defaming the Communist Party and China’s political system. Mr Lee’s supporters believe the confession was made under duress.

Mr Peng was “the ringleader” and Mr Lee “an active participant” in setting up a number of web groups on the popular QQ instant messaging service to attack the Chinese mainland’s social system and advocate a Western political system, the court said.

Mr Lee’s wife Lee Ching-yu, who travelled to the mainland for the sentencing, told Apple Daily: “As the wife of Lee Ming-che, I am proud of his dedication. We know one has to pay the price for pursuing ideals.”

“The evidence against him is not credible, his conviction preposterous but predictable. He is the latest to suffer under the Chinese authorities’ relentless attack against human rights and democracy activists,” Ms Rife said.

Taiwan has been self-ruled since 1949, when the KMT Nationalists fled there after losing the civil war to the Communists, and has been a democracy since the 1990s. Beijing has threatened on occasion to take it back by force if necessary. – Additional reporting: agencies