Brexit: No clarity on food, animal imports from North in no-deal rules 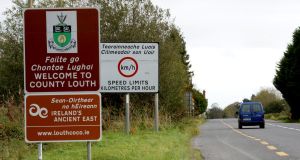 The border crossing-point from Louth as through the southern most tip of Co Armagh. Photograph: Alan Betson / The Irish Times

It is still not clear how the necessary checks would be made on animals and food entering the Republic from the North after a no-deal Brexit, despite new notices from the Government today to importers.

New checks will be needed on livestock and animal food products entering Ireland from the UK after a no-deal Brexit, the notices issued on Brexit have confirmed.

Animals and food products need to enter via registered special inspection posts, the notices confirm, but, none of these are currently available at or near the Irish Border.

A no-deal Brexit could happen as early as this weekend, unless EU leaders grant the UK an extension of its exit date at a summit on Wednesday.

The Government is currently in discussions with the European Commission in relation to how and where goods would be checked entering Ireland from the North, in the event of a no-deal Brexit.

Both sides are trying to minimise any necessary checks and locate them away from the Border, but animals and food products must , under EU law, be checked at the point of entry into EU territory at registered Border Inspection Posts (BIPs).

The notices from the Government, which have just been published for the information of those importing these products, highlight the checks that are needed under EU law to ensure animal and food safety – and thus safeguard the EU market and consumers.

If applied to the current movement of livestock across the Irish Border, this would be highly disruptive, as it would require 24-hour pre-notification of movement and, in the case of livestock, the holding of a UK veterinary health certificate.

The discussion between the Government and the European Commission are likely to examine the issue of cross-border animal and food movements, but it is not clear what, if any , leeway will be given. The information notices outline the EU requirements for pre-registration and also the need to present livestock and animal food products at Border Inspection Posts.

However currently the only inspection points for these imports are in Dublin and Shannon airports, with two new posts now being established at Dublin and Rosslare ports. This means it is not clear where livestock and food entering the Republic from the North will be checked.

The Government has said previously that in the event of a no-deal Brexit, it would press the UK to keep to its commitments under the backstop plan of maintaining the same regulations in the North as the Republic. Taoiseach Leo Varadkar said at the weekend that he believed in the event of a no-deal that the necessary checks could be conducted at Larne and Belfast Port as goods and animals entered the island of Ireland.

However the publication of the latest notices outlines the legal position which would apply in the event of the UK becoming a third country. This could happen as early as next Saturday, though the UK has applied for an extension in its current exit date which will be considered at an EU summit on Wednesday. The Irish Government, the EU and the UK committed as part of the withdrawal agreement to have no physical infrastructure at the Irish Border and to avoid any related checks.