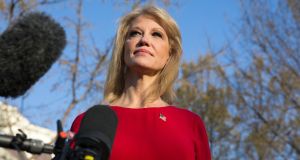 US president Donald Trump’s then adviser, Kellyanne Conway, provided a memorable example of post-truth in 2017 when she excused exaggeration of the numbers attending the president’s inauguration as “alternative facts”. Photograph: Michael Reynolds/EPA

Politics and truth never sat easily together, but the innovation of our post-truth era is that people have become indifferent to truth, says the French philosopher Myriam Revault d’Allonnes.

Revault d’Allonnes, the author of The Weakness of Truth; What Post-Truth Does to our Shared World, delivered a lecture on the dangers of post-truth at SciencesPo on April 4th.

The Brexit referendum and Donald Trump’s election brought the term into common usage in 2016, Revault d’Allonnes says. The Oxford English Dictionary made post-truth the word of the year because usage increased 2,000 per cent.

Trump’s adviser Kellyanne Conway provided a memorable example of post-truth in January 2017, when she excused exaggeration of the numbers attending Trump’s inauguration as “alternative facts”.

President Emmanuel Macron last year pushed through a so-called fake news law, which allows any French person to report false information to a judge during an election campaign. The judge is required to decide within 48 hours if the information should be censored.

The French law demands transparency in social media, including amounts paid and the identity of the person at the origin of postings. And the audiovisual council can shut down foreign television networks suspected of reporting false news.

Revault d’Allonnes says Macron’s fake news law will be difficult to enforce and will have little effect on the credulity of voters. Critics have denounced it as a threat to freedom of expression.

To Macron’s embarrassment, Le Monde newspaper reported last week that his advisers were instrumental in posting a misleading video at the height of the Benalla scandal last summer.

Macron’s bodyguard, Alexandre Benalla, was filmed beating up two protesters at a May 1st rally. He was eventually forced to resign and remains under investigation.

Ismael Emelien, a close adviser to Macron who has since resigned, merged two videos into one file, and asked Pierre Le Texier, in charge of social media at Macron’s La République en Marche party, to post them.

The first video showed the couple who Benalla beat up throwing bottles at police, moments before Benalla attacked them. Benalla obtained the video illegally from police video surveillance.

The second video, filmed by a journalist, showed an agitated demonstrator attacking police with a chair. Le Texier wrote the caption: “Let’s not pretend this was a good guy. He was a violent individual who knowingly came to the place de la Contrescarpe to attack cops.”

Except that the second video did not show the man Benalla beat up. As Le Monde reported, the “chair video” was taken hours later, 200 metres from the place de la Contrescarpe. “It was not the right person, place or time.”

N’Diaye was last week appointed government spokesperson. In July 2017, she said, “I have no problem at all lying to protect the president.”

French voters are used to hearing the far-right leader Marine Le Pen bend the truth, as when she falsely claimed that a French treaty with Germany, signed last January, was an “act of treason” which gave part of Alsace back to Germany.

But to learn that the entourage of Macron, the scourge of fake news, posted videos that were neither entirely true nor entirely false, with the goal of excusing Macron’s errant bodyguard, was shocking.

“They erased the frontier between truth and falsehood,” says Revault d’Allonnes. “They say, ‘It’s not true but it doesn’t matter. It could have been true.”

Post-truth “does not mean that an era of widespread lying has replaced one where truth triumphed,” Revault d’Allonnes says. It is about “blurred bearings and establishing an indifference to truth”.

The loss is enormous. “The world becomes unbearable because what enabled us to exchange, this sensus communis, is lost with post-truth,” Revault d’Allonnes continues, referring to Kant’s belief in the necessity of shared meaning. “Human relations work only if we can debate and exchange from a plurality of perspectives and points of view . . . In a democracy worthy of the name, facts must inform opinion.”

There is small comfort in the fact that untruths such as the Élysée video can be unmasked. Fact-checking is necessary but insufficient, says Revault d’Allonnes. “People have been told for so long that There Is No Alternative that they take refuge in fake news.”

In the long term, education, public debate and the arrival of new generations offer the greatest hope of emerging from the trap of post-truth, Revault d’Allonnes concludes.