Culture wars: even the arts are a Brexit battleground

Even the free movement of musical instruments could end, says one composer 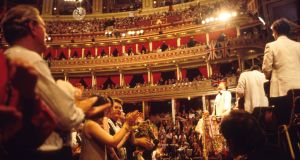 Last Night at the Proms: Remainers have taken to bringing European flags into the Royal Albert Hall to wave alongside the Union Jacks. Photograph: BBC

The heatwave, the World Cup and the endless madness at Westminster have made this summer in London feel as if it has been going on for ever. But for some, the true feeling of summer in the capital only began last week with the first night of the Proms.

Over the next eight weeks, about 300,000 people will attend almost 80 concerts at the Royal Albert Hall and other venues, many paying just £6 for a standing ticket. Among the themes this year are the centenaries of the end of the first World War, the introduction of women’s suffrage and the birth of Leonard Bernstein.

If Friday’s programme of Schumann, Mendelssohn and others fails to excite you, there are still tickets available for La Bohème at the Royal Opera House, some for as little as £11. The Lehman Trilogy at the National Theatre, directed by Sam Mendes and starring Simon Russell Beale as one of the Lehman brothers, is sold out for its entire run.

But you should get a ticket for Friday evening’s performance of Patrick Marber’s adaptation of Ionesco’s Exit the King, with Rhys Ifans and Indira Varma. And during the afternoon, you could take in the Summer Exhibition at the Royal Academy, co-ordinated this year by Grayson Perry.

The wealth and excellence of London’s cultural offering is not only a major tourist attraction and one of the joys of living in the city, it is a longstanding part of Britain’s national identity.

In Humphrey Jennings’s 1942 propaganda film Listen to Britain, a visual poem spanning 24 hours across wartime Britain, the climactic scene shows Myra Hess performing a Mozart piano concerto at a lunchtime concert at the National Gallery. The music plays over a montage of shots showing the queen (later the queen mother) in the audience, Trafalgar Square, Nelson’s Column, buses rounding a corner and a barrage balloon flying overhead.

Then it cuts to a scene of soldiers marching, bayonets raised and to a munitions factory, with a piston rising and falling. The film’s final images of wheatfield, a factory, a power station and an aerial shot of the English landscape through the clouds are accompanied by Elgar’s Rule Britannia.

The film has no commentary, save for a prologue spoken by Leonard Brockington, a Canadian barrister: “Many years ago, a great American, speaking of Britain, said that in the storm of battle and conflict, she had a secret rigour and a pulse like a cannon. In the great sound picture that is here presented, you too will hear that heart beating. For blended together in one great symphony is the music of Britain at war.

“The evening hymn of the lark, the roar of the Spitfires, the dancers in the great ballroom at Blackpool, the clank of machinery and shunting trains. Soldiers of Canada holding in memory, in proud memory, their home on the range. The BBC sending truth on its journey around the world. The trumpet call of freedom, the war song of a great people. The first sure notes of the march of victory, as you, and I, listen to Britain.”

Heard today, the words sound like a distillation of the spirit invoked by the most romantic Brexiteers and the Last Night of the Proms has itself in recent years become a battleground for Brexit. Remainers in the audience have taken to bringing European flags into the Royal Albert Hall to wave alongside the Union Jacks during the final, patriotic sequence in the programme.

The audience for opera and classical music in Britain includes a generous share of Brexiteers, but among those who work in the arts, it is more difficult to find anyone who doesn’t regret the decision to leave the EU. For many, Brexit could be as much a practical problem as a political one, as composer Howard Goodall pointed out recently.

“Even if we were to negotiate visa-free access for musicians, orchestral players would still see 15-20 per cent of their salary deducted to pay for social security in their host country, a cost that is currently waived under the EU’s A1 system,” he wrote.

“Even the movement of instruments would become more problematic. Outside of a customs union, musicians would need to hold an ATA Carnet to avoid paying import duties and taxes on their instruments. Such carnets are expensive, and checks will lead to long queues at borders.”

The Creative Industries Federation warned last month that, without an agreement to guarantee ease of movement between Britain and the EU, the impact on the country’s position in the international cultural world would be “catastrophic”.

Chief executive John Kampfner suggested that summer festivals could be hit especially hard by extra costs for visas and transporting equipment. “Self-employed people and freelancers, who make up almost half the creative workforce, simply will not be able to come to work in the UK,” he said.