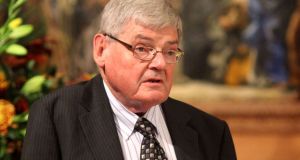 Peter Preston, the former Guardian editor who died in January, was a great advocate for what he called “zing” in journalism, arguing that “serious doesn’t need to be dull”. At his memorial service at St Bride’s Church on Fleet Street on Thursday, the zing was provided by the choice of Daily Mail editor Paul Dacre to give an address.

Dacre, who will retire as editor in November, is the number one journalistic hate figure for many of the Guardian’s liberal-minded, pro-European readers and writers. His newspaper’s campaigns against judges and pro-European MPs, denouncing them as traitors and “enemies of the people”, could not be more distant from the decent, liberal internationalism that informed Preston’s journalism.

But as Dacre told the packed church, they were kindred spirits in their obsession with journalism and the craft surrounding print newspapers. Neither man had much in the way of small talk and both eschewed celebrity parties and the society of those in power.

“I see a slightly lonely figure – one who was all too acutely aware that an editor, who operates without fear or favour, can’t really have friends,” Dacre said of Preston. “And then again, good editors need to be outsiders because, let’s be honest, most people only befriend journalists to get something into a paper or – more pertinently – keep it out.”

Preston was, Dacre said, “the journalists’ journalist and the editors’ editor”, loving “that magical symbiosis of newsprint, pictures, headlines, fonts and beautiful words” of print newspapers.

Preston did indeed love the craft of journalism, but he was more committed to its serious purpose, which drove the last project of his life, the creation of the European Press Prize. The prize, funded by a number of newspaper-owning foundations, including The Irish Times Trust, honours journalists from all 47 countries in the Council of Europe.

Harry Evans, at 90 the greatest living English newspaper editor, paid tribute to Preston’s stewardship of the prize in a message read at the memorial service by Maggie O’Kane.

Journalism seeks to tell the truth as it sees it, and to uphold the right of others to explore or dispute such truth

Writing about the prize a few years ago, Preston described the purpose of quality journalism. “It aims to inform and sometimes educate the reader. It champions the freedom of the press, because that freedom underpins democracy. It believes in full and diligent research, because the stories it develops have to be rooted in facts,” he wrote.

“It tackles complex subjects and helps make them simpler. It is never afraid to take a contrary view, for democracy depends on reasoned alternatives. It is the product of free minds, not formulas. It believes it can foster a vibrancy in public debate, provide fresh perception of the possible and new understanding of the human condition. It can be the voice of one man or woman, working alone – or of a mighty publishing empire. It seeks to tell the truth as it sees it, and to uphold the right of others to explore or dispute such truth.”

Many of the entries for the European Press Prize are from journalists operating in difficult and often dangerous circumstances, working with tiny budgets as they uncover corruption in Russia, central and eastern Europe or the Balkans. In recent years more European states are governed by politicians who demonise journalists, dismissing their work as “fake news” and presiding over the closure of important news organisations or their takeover by political cronies.

In his last column for the Observer, written a few days before he died, Preston addressed the challenge to journalism and the free press from Donald Trump and his European imitators.

“If there is one compelling challenge for journalists and their rough trade in 2018, it lies in re-establishing some modest degree of public respectability: in short, a measure of trust. For without a doff of the cap as big news breaks, there is only a shrug of the shoulders – which really means nothing at all,” he wrote.

“We remember Watergate, the Pentagon Papers and similar triumphs. They burnish our business. But they are not, by any means, the whole of the business: a business that means treating readers in a jam like human beings, identifying distress, becoming a functioning part of society rather than commentators at its edges. In short, seeking to be worthy of trust in the hole where admiration ought to be.”