As the Popular Party chooses a new leader, members grapple with a threat of extinction 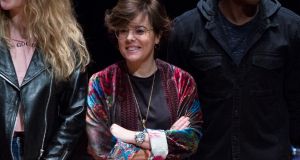 It’s mid-morning in El Mirón and the main square is empty, except for a large stork, which glides overhead to its nest on top of the church nearby. The children’s playground, a strip of grass on the edge of town with some swings and a slide, is empty. And beyond stretch the plains of Castilla y León.

“People here have always had what they needed: a few cows, a home, the countryside,” says Ricardo Enríquez, a local pensioner who was born here, speaking in the local bar.

He describes the main economic activities of the town as “livestock and drawing your pension”, as he points to the predominantly elderly population and the fact that no children live here.

As for its politics, he says: “Even when this place was dirt poor, it always leaned to the right.”

Ever since Spain’s return to democracy in the late 1970s, El Mirón has voted that way, and in the 2016 general election, 87 per cent of its voters backed the centre-right Popular Party (PP).

This sparsely populated, agricultural area 160km west of Madrid is probably the most conservative place in Spain. It is also the electoral heartland of the PP, which will choose a new leader this weekend.

But while the PP has the most seats in parliament and its dominance in towns like this one is unquestioned, it is suffering an unprecedented existential crisis. The main force on the right in the country’s modern democratic period, the PP has governed for a total of 15 years, under José María Aznar and then Mariano Rajoy. But some are warning it is now in danger of sliding into irrelevance, or even of extinction.

“Under Aznar and then under Rajoy, the PP had the image of being Spain’s great national party,” noted Jordi Juan of La Vanguardia newspaper. “And now all of that iconography has come tumbling down like a house of cards.”

The party was abruptly ousted from power in June after nearly seven years in government. Plagued by corruption scandals, it lost a no-confidence motion presented by the Socialist opposition, which has now replaced it as the party of government.

The decision of Rajoy, the PP’s leader since 2004, to step down from that post sparked the current leadership primary, which will see his former deputy prime minister Soraya Sáenz de Santamaría (47) face off against Pablo Casado, the party’s 37-year-old communications secretary.

In recent days their contest has turned bitter, as they have exchanged veiled insults through the media. A video that offers snide criticism of Santamaría’s leadership credentials has also been circulating, undermining the PP’s reputation for unity and discipline.

But many believe the PP needs not only a new leader but also a new sense of purpose if it is to survive in the long-term.

El Mirón represents one of the most obvious challenges for the party: to recruit younger voters, given that more than 40 per cent of its electoral base is made up of pensioners. Those older, Catholic and often rural supporters tend to have highly conservative ideas about certain social issues, says political analyst Kiko Llaneras.

“The problem is, those voters are increasingly detached from the rest of Spanish society,” he says. Llaneras cites euthanasia, the legacy of the Franco dictatorship and bullfighting as issues where those core PP supporters tend to oppose reform.

“So [the PP] has to do a juggling act to avoid alienating these voters on certain issues without detaching themselves from mainstream Spanish society,” he explains. “That is their biggest challenge.”

During the current leadership contest, Pablo Casado, despite his youth, has appeared to attempt to connect to those hardline voters, attacking a Socialist initiative to legalise euthanasia, appearing at the running of the bulls festival in Pamplona in traditional garb and dismissing attempts to dig up victims of the Franco dictatorship from mass graves as “the same old story”.

The PP’s relationship with the past is a particularly live issue, given that it must now decide whether to boast about the Rajoy years, highlighting the economic stability they brought, or avoid mention of them due to the embarrassment created by a seemingly endless stream of graft scandals during the period.

The party was originally founded as the Popular Alliance (AP) by members of the regime of the recently deceased Franco in the mid-1970s. It rebranded as the Popular Party in 1989, and under Aznar’s leadership led the country through the economic boom that followed.

But in recent years, during its second term in government, it has faced a new threat on the right: Ciudadanos. Preaching a stridently unionist message as the recent Catalan crisis erupted and riding Spaniards’ outrage at the PP’s corruption woes, Ciudadanos has surged in polls at the expense of its rival.

To the dismay of his former colleagues, Aznar has praised the new party’s vision and message while admitting last year that he had “to make an effort to recognise” his own PP.

With Casado offering a bold, unapologetically right-wing message and taking a hard unionist line on the Catalan issue, he has been forced to deny rumours that Aznar is sponsoring his candidacy.

Santamaría, meanwhile, is seeking to avoid being tarnished by the legacy of her former boss Rajoy, while offering a more moderate, modernising image than her rival. Three thousand party delegates will decide the winner.

But in El Mirón, despite the PP’s dominance, the details of the leadership contest have barely registered and most locals express little enthusiasm for either contender.

Gabriel Mayoral, a 93-year-old who has lived through the Second Republic of the 1930s, the civil war that followed and the ensuing dictatorship, has always voted for the PP in the democratic era. Although he has no preferred candidate for leader, he says whoever it turns out to be “has to be intelligent and not be interested in stealing from people”. He adds: “Because stealing is a sin, you know.”