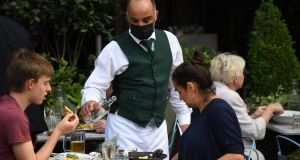 A masked waiter serves in a restaurant in Covent Garden in London on Tuesday. The British government has said all pubs, bars, restaurants and other hospitality venues in England must have a 10pm closing time from Thursday. Photograph: Neil Hall/EPA

Boris Johnson was grave as he told MPs on Tuesday about his six-month coronavirus clampdown and for the most part emollient in answering their questions.

But when Keir Starmer offered Labour’s backing for the measures, offering to do anything necessary and reasonable to help the national effort, the prime minister sounded peevish as he thanked him for his support.

There was support but little enthusiasm from Conservative MPs as one after another they voiced their misgivings and called for parliament to have a say before new restrictions are introduced. It was not quite as awkward as some of Theresa May’s statements on Brexit, when she would wait an hour for a friendly question from her own benches, but it was a long time before Johnson heard a word of full-throated praise.

When Labour’s Ben Bradshaw suggested that Germany and Italy were more successful at keeping coronavirus at bay because they had good test and trace systems, Johnson said that the difference was that Britain was a freedom-loving country. But it was when Stephanie Peacock said a constituent had been asked to travel 300 miles for a test for her son that the prime minister snapped.

“I increasingly think it is disgraceful that the Labour opposition continue to blame NHS Test and Trace for the resurgence of the disease,” he said.

“They are talking absolute nonsense. Testing and tracing has very little or nothing to do with the spread or the transmission of the disease.”

In May, Johnson was trumpeting a “world beating” test and trace system “that will help us very greatly to defeat this disease and move the country forward”. His prickliness about it on Tuesday may have been caused by his own promises coming back to haunt him as his own MPs fear he is about to make the same mistakes in the second coronavirus wave as he did during the first.

In his speech to Labour’s virtual annual conference on Tuesday morning, Starmer summed up the prime minister’s character in words that seem to have struck home.

“Tory backbenchers know it. His cabinet knows it. We all know it,” he said.  “He’s just not serious. He’s just not up to the job. Whenever he encounters a problem, Johnson responds either by wishing it away or by lashing out.”