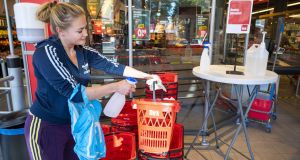 A customer disinfects a shopping basket in Amsterdam, the Netherlands. Infections have surged in the Netherlands this month, with a new record of 2,245 infections detected in 24 hours this week in the country of 17 million. Photograph: Evert Elzinga/EPA

Across Europe, governments are tightening pandemic restrictions in response to a steep rise in infections this month, with expectations that more drastic measures may be required if the spread of the disease is not brought under control.

Many governments are reluctant to repeat the kind of nationwide restrictions seen earlier in the year, and have been focusing on building up testing and tracing capacity in order to make measures more targeted.

Nevertheless, there is concern in many countries that these efforts may not have been enough, and some leaders have warned national lockdowns could lie ahead. How do international policies compare to Ireland?

The grass is often greener: when the new restrictions for Dublin were announced last week, the Belgian virologist Marc Van Ranst praised the system and called for Belgium to adopt a similar one. In a country of 11.5 million, there were an average of over 1,100 new infections a day in the seven days up to September 16th – a 65 per cent increase according to authorities – putting the cities of Brussels, Antwerp, Liège and Ghent in what Prof van Ranst said would be an Irish “stage three”.

“What we need is a system with different stages with different measures,” the prominent virologist wrote on social media. “Ireland is a good example.”

Across Belgium, face masks are compulsory on public transport and most indoor places, and in the Brussels region are mandatory anywhere the public can access. By appearances, observance of the rule is high.

Households may meet up socially with only five people who don’t live with them, and these people must always be the same five “stable contacts”. If 1.5m of distance can be observed during the activities, this group can increase to 10. If possible, people should work from home.

Bars and restaurants can open until 1am, but customers may visit only with members of their household or their five “stable contacts” and wear face masks when not sitting at a table. Nightclubs and discos have not been allowed to reopen, and large events like concerts are still prohibited.

Official events such as sports competitions or village fetes can be held with a maximum of 100 attendees indoors or 200 outdoors. Groups of up to 50 people can exercise together in sports clubs. Up to 100 may attend religious services, as long as they wear face masks. Funeral and wedding ceremonies have the same rules as religious services, but receptions can only have a maximum of 10 people, if distance is maintained.

Face masks are a rare sight on Dutch streets, making it an outlier in Europe. The Netherlands experienced severe shortages in the first wave of the pandemic and initial caution about recommending them has sunk in deep: even patients attending appointments in hospital are often told to remove face masks if they arrive wearing one. Non-medical face masks are mandatory on public transport, however.

The Netherlands has long been an outlier for its more liberal approach to restrictions. While only essential services remained open in much of Europe at the height of the pandemic in spring, Dutch high streets remained largely open for business throughout.

Partly due to the low level of face mask use, the US-based Institute for Health Metrics and Evaluation forecasts that if policy does not change the Netherlands will by January have one of the highest death rates per capita in the world.

The core of Dutch advice is that people should keep 1.5m apart if they do not live together. Businesses are advised to adjust accordingly. People playing sports or doing hobbies that involve close contact should maintain the distance where possible. Schools are exempt.

Households should not have more than six adult visitors, but children are exempt. There are no limits to the number of people who can attend a gathering if attendees make reservations and undergo pre-entry health checks. Otherwise, numbers are limited to 100. There are no visitor limits for museums and shops, which have a constant flow of people.

Infections have surged in September, with a new record of 2,245 infections detected in 24 hours this week in the country of 17 million, which has a lower level of testing than neighbouring countries. In response, the government imposed additional restrictions on six regions. Businesses with a catering licence must close at 1am, and gatherings such as parties, outings and receptions for over 50 people are banned. Exemptions to this include religious events, funerals, dance and theatre.

France has been logging more than 10,000 new coronavirus cases a day with a population of 67 million and deaths have also begun ticking up, with a four-month high of 154 deaths recorded on September 18th.

Masks have become compulsory in enclosed public spaces in France, in workplaces and in schools for pupils aged over 11. In cities with a higher incidence of the disease including Paris, Marseille and Lyon, they are mandatory outside the home.

Bars and restaurants reopened in June, but with customers spaced out, new cleaning procedures and hand sanitiser provided. Theatres, cinemas, casinos, race tracks and stadiums have an upper limit of 5,000 people per venue, but with modifications such as leaving seats free to space out customers.

Some 55 areas including Paris are classified as “red zones”, meaning coronavirus is actively circulating there. Local authorities can impose additional restrictions in these cases, and some have curtailed public gatherings and bar opening hours.

An extensive contact-tracing and testing system is credited with saving Germany from the level of infections seen in neighbouring countries. Nevertheless, daily infections detected have reached the highest level since April, with 2,297 logged in 24 hours over the weekend for a population of 83 million. Germany already tightened restrictions in response to rising cases in August, making face masks obligatory and banning attendance to concerts and sports events until the end of the year.

However, the country’s federal states are in control of much of the restrictions, meaning measures vary from region to region. Broadly, advice is anchored on limiting contacts, washing hands, staying 1.5m apart and wearing masks.

Spain has struggled to bring the virus under control since becoming one of the hardest-hit countries in Europe earlier this year, and recently set a new record for the most number of infections detected in a day, with 14,389 logged in a country of 47 million. Nationwide, face masks are mandatory and no more than 10 people can meet. Harder-hit regions have brought in stricter local measures, with areas of Madrid banning gatherings of over six people and requiring residents to stay within their own neighbourhoods.