University of Washington predicts overall toll will double to 400,000 by the end of year 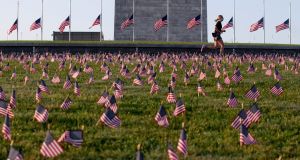 A jogger runs past thousands of US national flags placed near the Washington Monument to memorialise Americans who have died with Covid-19 in Washington, DC. Photograph: EPA

The US death toll from coronavirus has topped 200,000, a figure unimaginable eight months ago when the outbreak first reached the world’s richest nation with its sparkling laboratories, top-flight scientists and stockpiles of medicines and emergency supplies.

The bleak milestone, by far the highest confirmed death toll from the virus in the world, was reported by Johns Hopkins, based on figures supplied by state health authorities, but the real toll is thought to be much higher, in part because many Covid-19 deaths were probably ascribed to other causes, especially early on, before widespread testing.

The number of dead in the US is equivalent to a 9/11 attack every day for 67 days, and it is still climbing.

Deaths are running at close to 770 a day on average, and a widely cited model from the University of Washington predicts the overall toll will double to 400,000 by the end of the year as schools and colleges reopen and cold weather sets in. A vaccine is unlikely to become widely unavailable until 2021.

The figure reflects America’s unenviable spot, which it has held for five months, as the world’s leader in numbers of confirmed infections and deaths. The US has less than 5 per cent of the globe’s population but more than 20 per cent of the reported deaths.

In an interview on Tuesday with a Detroit TV station, Donald Trump boasted of doing an “amazing” and “incredible” job, adding: “The only thing we’ve done a bad job in is public relations because we haven’t been able to convince people – which is basically the fake news — what a great job we’ve done.”

In a pre-recorded speech at a virtual meeting of the UN General Assembly, the US president also lashed out at Beijing over what he called “the China virus” and demanded that it be held accountable for having “unleashed this plague on to the world”.

But Dr Cedric Dark, an emergency physician at Baylor College of Medicine in Houston, said: “All the world’s leaders took the same test, and some have succeeded and some have failed. In the case of our country, we failed miserably.”

Blacks, Hispanics and American Indians have accounted for a disproportionate share of the deaths, underscoring economic and health care disparities in the US.

Worldwide, the virus has infected more than 31 million people and is closing in fast on a million deaths, with more than 965,000 lives lost, by Johns Hopkins’ count, though the real numbers are believed to be higher because of gaps in testing and reporting. – PA