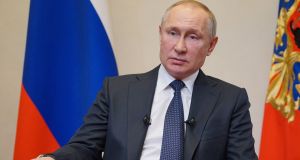 Russian president Vladimir Putin has postponed a nationwide vote that was set to extend his rule by 12 years, bowing to increased pressure to delay after being warned that the coronavirus outbreak in the country was far worse than his government’s data suggested.

The about-turn is a blow to Mr Putin, who needs the public vote to complete his rapid rewriting of the constitution in order to extend his control of the Kremlin beyond 2024 but has found his political plans thrown into disarray by the spread of Covid-19.

Mr Putin, who had earlier vowed that the April 22nd vote would go ahead while stressing that the spread of the disease was “under control”, used a nationwide address on Wednesday to announce his U-turn, hours after the number of Covid-19 cases in Russia jumped by a third in its largest daily increase.

“You know how seriously I feel about this [vote],” said Mr Putin, in a sombre speech broadcast across television channels. “However, our absolute priority is the health and safety of our people, which is why I think it is necessary to move the vote to a later date.”

The constitutional changes, which Mr Putin first suggested in a shock announcement in January, have been rushed through a rapidly assembled drafting committee and were approved by both houses of parliament last month.

The final hurdle is a national plebiscite and, if the changes are endorsed by a majority of the public, they would reset Mr Putin’s presidential terms to zero. This would allow him to run twice more after 2024, by which time he will have completed four terms as president.

Mr Putin said a new date would be chosen once the scale of the outbreak was better understood. He did not use the speech to impose a full-scale quarantine on Russia, as many European cities have done, but announced a “long weekend” that would run from Saturday, March 28th to Sunday, April 5th, essentially asking people not to go to work next week.

“Don’t think, as we Russians do, ‘It won’t happen to me!’. It can happen to anyone. And then what’s happening today in many western countries, in Europe and across the ocean, could happen to us in the near future,” said Mr Putin.

“Following all recommendations is absolutely essential. Keep yourselves and your loved ones safe by being disciplined and responsible. And, believe me, the safest thing now is to stay home.”

The speech, announced just hours before it took place, came a day after the mayor of Moscow, who is Mr Putin’s former chief of staff, publicly warned the president that the number of people infected was “far more” than his government was admitting and that the healthcare system was in danger of being overrun.

The Kremlin has already shut down Russia’s borders to almost all foreigners and introduced “heightened preparedness” measures to prevent the disease’s spread, but has stopped well short of the full lockdowns or mass testing implemented in many other countries.

Despite a jump in cases on Wednesday that took Russia’s total to 658, the country has reported far fewer cases than all other major European countries.

Some experts have questioned the level of testing and methodology employed by Moscow. Analysts have voiced concerns that the Kremlin has downplayed the crisis to maintain calm ahead of next month’s vote.

Mr Putin said that the “health and safety of our citizens is our top priority”. He added: “Completely blocking [the virus] from entering our country is objectively impossible. But what we can and are doing is professional, organised work to prevent it.”

Several large Russian companies, including state lenders VTB and Gazprombank and internet leader Yandex, have ordered some staff to work remotely. Traffic on the Moscow metro is down 44 per cent, while people over 65 can no longer use public transport for free – in an attempt to make them stay home.

Yet though Russia ordered cinemas and nightclubs to shut indefinitely on Tuesday, restaurants across the country largely remain open.

Mr Putin also announced measures aimed at boosting Russia’s economy, which has been battered in recent weeks by a fall in global oil prices after Moscow pulled out of the Opec+ producers’ deal to support them.

The largely incremental moves included an increase in unemployment and sick-leave payments to the 12,000-rouble (€142) monthly minimum wage; relief on consumer loan and mortgage payments; a bankruptcy moratorium for small businesses; and tax holidays for small businesses.

Mr Putin said Russia would fund the measures through a series of new taxes on the wealthy and the shadow economy, rather than tapping its €138 billion national wealth fund. – Copyright The Financial Times Limited 2020