Covid-19: Resolute Macron says France ‘will not give in’ 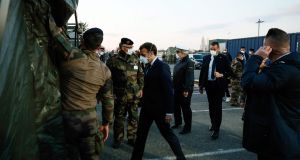 Macron spoke outside an army field hospital in Mulhouse, eastern France, at the end of a day devoted to the doctors, nurses, pharmacists and ambulance drivers who are “on the front line” of the battle against Covid-19.

The president promised overtime payments, a “gratitude bonus” to medical personnel and a massive investment plan for French hospitals once the crisis ends.

He did not mention the expected extension of the nationwide lockdown that started on March 17th and was scheduled to last two weeks. Minister for Health Olivier Véran says it is likely to be prolonged at least until April 28th.

The Élysée called eastern France “the emotional epicentre” of the epidemic.

More than one-third of France’s 1,331 Covid-19 fatalities were in the east of the country. An additional 231 people died in 24 hours from Tuesday to Wednesday evening. At least 25,233 French residents have contracted the virus.

These figures concern hospitalised patients only, and casualties are feared to be much higher. People who suspect they have the illness have been instructed to self-isolate unless they experience difficulty in breathing. Only at that point are they to call emergency services.

Martin Hirsch, director general of public hospitals in Paris, issued an urgent appeal for equipment and donations, saying more than 1,000 patients are in critical condition in Paris.

Hirsch asked for respirators, for “thousands” of additional personnel, whether volunteers or requisitioned, and medical supplies. He said it was impossible to plan more than three days in advance.

Twenty-one residents of a nursing home in the Vosges are believed to have died of Covid-19. All were in their 90s. Healthcare professionals fear the epidemic could claim the lives of as many as 100,000 nursing home patients.

President of the French hospital federation Frédéric Valletoux said between 100 and 150 of 700 nursing homes in the Paris region are believed to have been infected with the virus.

Eighteen care givers at a nursing home in the Charente region confined themselves with residents to avoid spreading the virus.

France is conducting 5,000 coronavirus tests per day, because it has the capacity to do no more. The minister for health on Wednesday told the French senate that a new serological test, conducted on blood samples rather than by extracting mucous from the nasal cavity, had been fast-tracked for approval at the Institut Pasteur.

The favoured strategy will be to step up testing to up to 50,000 per day when the lockdown is lifted, so that only carriers of the virus will need to be isolated.

How have legislators reacted?

Earlier in the day, the French National Assembly passed 25 decrees, a record in the 62-year history of the fifth republic. “This will be more and more an economic shock, a social shock,” said prime minister Edouard Philippe.

The decrees create a €1 billion solidarity fund for small, independent enterprises, help for the tourism industry and adapt regulations for public markets.

Politicians voted to give absolute priority to medical personnel with regard to protective clothing, transport and lodging. They authorised increased unemployment benefits and continuation of all social welfare payments. At the same time, employers were granted the possibility to ask employees to work up to 60 hours weekly. The justice system was authorised to free up to 6,000 prisoners.

Meanwhile, minister for finance Bruno LeMaire said the economy would suffer “a big step backwards” from the crisis. And Orly airport announced that it will close temporarily from March 31st because of the declining number of flights. The few runways still open at Roissy Charles de Gaulle will absorb the remaining traffic from Orly.

1 Ireland has strategy to ‘break the chains’ of coronavirus - WHO’s Mike Ryan
2 Coronavirus: Intensive care units ‘may be overrun’
3 UK makes another coronavirus U-turn but doubts over strategy linger
4 ‘Everyone still thinks it’s a joke’ - parents of toddler with coronavirus speak out
5 Impact of Covid-19 on Travelling people: ‘Worst that ever came’
Real news has value SUBSCRIBE