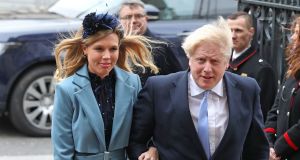 Carrie Symonds, the pregnant fiancee of British Prime Minister Boris Johnson, said she had spent the past week in bed with symptoms of the novel coronavirus but after seven days of rest felt stronger and was on the mend.

“I’ve spent the past week in bed with the main symptoms of coronavirus. I haven’t needed to be tested and, after seven days of rest, I feel stronger and I’m on the mend,” she said.

“Being pregnant with Covid-19 is obviously worrying. To other pregnant women, please do read and follow the most up to date guidance which I found to be very reassuring.”

Mr Johnson said on Friday he was remaining in isolation with mild symptoms of Covid-19, including a raised temperature, seven days after he first tested positive for coronavirus.

Mr Johnson (55), and Ms Symonds (32), announced in February that they were expecting their first child together and were engaged to be married.

After Mr Johnson last month became the first leader of a major power to announce he had tested positive, he went into isolation at a flat in Downing Street.