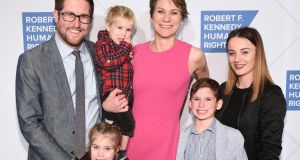 David McKean, Maeve Kennedy Townsend McKean and family in 2019. Maeve and eight-year-old son Gideon (R) went out in a canoe in the Chesapeake Bay on Thursday and did not return to shore. File Photograph: Mike Pont/Getty Images

The search for the daughter and a grandson of Kathleen Kennedy Townsend, the eldest daughter of Robert F Kennedy is being treated as a recovery mission, authorities said.

Maeve Kennedy Townsend McKean (40) and her eight-year-old son Gideon Joseph Kennedy McKean went out in a canoe in the Chesapeake Bay on Thursday and did not return to shore.

“With profound sadness, I share the news that the search for my beloved daughter Maeve and grandson Gideon has turned from rescue to recovery,” Kathleen Kennedy Townsend said in a statement, according to news outlets.

A Maryland Natural Resources Police spokeswoman said authorities suspended the search on Friday night but it would resume Saturday morning.

A family haunted by tragedy, misfortune and controversy VIEW NOW

Ms Kennedy Townsend, who served two terms as Maryland’s lieutenant governor, is the eldest daughter of Robert F Kennedy, former attorney general of the US, who was assassinated in 1968.

Maryland governor Larry Hogan said: “I reached out to and spoke with Lt. Gov. Townsend this morning and on behalf of the people of Maryland I expressed our most heartfelt sympathies and prayers to her and to her entire family during this difficult time.”

The search began after the state Natural Resources Police responded to a report of two people on a canoe in the Chesapeake Bay who appeared to be overtaken by strong winds.

A statement from the agency, which did not name the missing people, said they may have been paddling the canoe from a home in Shady Side, Maryland, to retrieve a ball and could not paddle back to shore.

An overturned canoe matching the one used by the missing people was found on Thursday night, the agency said.

“News of this tragedy hit me and my family hard this morning,” said Anne Arundel County Executive Steuart Pittman.

“We are holding Kathleen and her family in the light, and holding our own loved ones a little closer as we reflect on their pain and their loss,” he said in a statement. –AP