Coronavirus: Britain can turn the tide on Covid-19 in 12 weeks, Johnson says 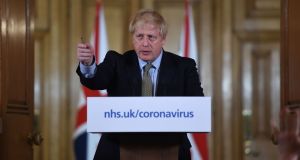 Britain can turn the tide on coronavirus within 12 weeks, Boris Johnson has said, as the UK’s death toll from the Covid-19 pandemic reached 144. The British prime minister said trials for a Covid-19 vaccine could begin within a month and that testing would be ramped up from 5,000 cases a day to 10,000 a day, and eventually 250,000 a day.

“I believe that a combination of the measures that we’re asking the public to take and better testing, scientific progress, will enable us to get on top of it [the virus] within the next 12 weeks and turn the tide. I cannot stand here and tell you that by the end of June that we will be on the downward slope. It’s possible but I simply can’t say that that’s for certain,” he said.

“We don’t know how long this thing will go on for. But what I can say is that this is going to be finite.”

The prime minister dismissed speculation that London was facing an imminent lockdown following reports that public transport could be shut down, travel in and out of the city restricted and people forbidden to leave their homes except for essential purposes. But he left the door open to telling bars and restaurants to close if customers did not heed the government’s advice to stay away from them.

“I do stress that we want to see people following the advice in the capital,” he said.

“There are some areas where people are not following them [the advice] in the way that we want them to.”

Chief medical officer Chris Whitty said evidence from the US showed that, although older people and those with underlying health conditions were most vulnerable, the coronavirus could kill younger people too.

The British government on Thursday introduced a Bill that would give the authorities sweeping powers to enforce measures aimed at combating the pandemic. Police could detain people suspected of having the virus for 48 hours to refer them for testing, and if they are found to be positive, to send them into quarantine for 14 days. Meanwhile, ministers would be able to ban mass gatherings, shut premises, direct ports to close and lower standards of care for the elderly provided by local authorities.

In a message to the nation on Thursday, Queen Elizabeth called on people to come together for the common good.

“We are all being advised to change our normal routines and regular patterns of life for the greater good of the communities we live in and, in particular, to protect the most vulnerable within them. At times such as these, I am reminded that our nation’s history has been forged by people and communities coming together to work as one, concentrating our combined efforts with a focus on the common goal,” she said.

“Many of us will need to find new ways of staying in touch with each other and making sure that loved ones are safe. I am certain we are up to that challenge. You can be assured that my family and I stand ready to play our part.”

On Thursday, it emerged that up to 40 London Underground stations which do not interchange with other lines will close until further notice, while the Waterloo and City line and Night Tube services will not run from Friday.

The latest developments come as the number of people in Scotland who have died after contracting Covid-19 has increased from three to six.

Nicola Sturgeon announced that the number of deaths had doubled as she addressed MSPs at the start of first minister’s questions.

She also confirmed a rise of 39 in the reported number of coronavirus cases in Scotland, with this figure now standing at 266.

The first minister said: “I would stress, as I have done previously, that that is likely to be an underestimate of the true prevalence of the infection across our society.”

Britain faces a “massive shortage” of ventilators that will be needed to treat critically ill patients suffering from coronavirus, after it failed to invest enough in intensive care equipment, a leading ventilator manufacturer has said.