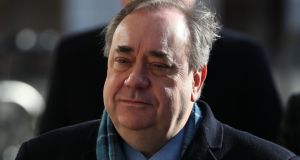 Former Scottish first minister Alex Salmond arrives at the high court in Edinburgh on Tuesday for the sixth day of his trial over accusations of sexual assault. Photograph: Andrew Milligan/PA Wire

Former Scottish first minister Alex Salmond told a court that some of the 13 sexual offences charges he faced were “political fabrications” while others were exaggerations.

Mr Salmond – who has pleaded not guilty to all charges against him, including attempted rape and other sexual and indecent assaults against a total of 10 women – was giving evidence on Tuesday for the first time at his trial at Edinburgh’s high court.

The former first minister and Scottish National Party leader said he wished he had been “more careful” with other people’s personal space. But when asked by defence lawyer Gordon Jackson QC why past incidents were now being treated more seriously, Mr Salmond said there were “two reasons”.

“One is that some, not all, are fabrications, deliberate fabrications for a political purpose,” said Mr Salmond, who was first minister from 2007 to 2014. Others were “exaggerations taken out of proportion” based on memories that had been reinterpreted over time, he added.

Mr Salmond accused one alleged victim, a senior official in the Scottish government, of making up claims that he had kissed her on the lips, touched her on the side of her breasts while walking in the street and groped her at a party.

“It is a fabrication, just as she has encouraged at least five other people to exaggerate or make up claims against me,” he said.

Mr Salmond said he had apologised to one civil servant over a 2013 incident that resulted in an accusation of sexual assault with intent to rape, but denied her claims that he had lain on top of her on a bed at his official residence and kissed her and touched her under her skirt.

After drinking Chinese spirits together during a late evening work session they had ended up side by side on the bed in a “sleepy cuddle” that had ended as soon as she said it was a bad idea, Mr Salmond said.

“I have never attempted to have non-consensual sexual relations with anyone in my entire life,” he said. “I don’t even think I had an intent to cuddle. It’s something that happened in tipsy circumstances.”

Mr Salmond denied a separate allegation of attempted rape against a former Scottish government official in 2014. He said the woman had lied about the alleged incident and his “once and once only” sexual encounter with her had been a consensual one the previous year that she had initiated.

On that occasion, both had not been naked but in a state of “partial undress”. “We parted good friends,” he said.

The former first minister denied grabbing a female civil servant, who like all of the alleged victims cannot be identified for legal reasons, and trying to kiss her against her will in an attempt to recreate the scene in a painting by Scots artist Jack Vettriano.

Mr Salmond said he had taken the woman’s hands and suggested they recreate the scene, but stopped when the civil servant told him not to be “daft”.

Mr Salmond denied grabbing the bottom of another civil servant while the two were having a photograph taken at an official event in 2014. He denied touching another woman on the buttocks at a restaurant, saying he had merely touched her lower back while trying to “chivvy” her up some stairs because they were late.

Asked about an incident where he was alleged to have stroked the face of a civil servant while she was sleeping next to him in a car, he said he had done so only in an attempt to wake her up gently. He said he had sometimes touched that woman’s hair, but never in a sexual way.

Mr Salmond was also asked about claims he imitated a zombie while working late at his residence with a political party worker as a prelude to holding her by the shoulders and trying to kiss her on the mouth.

The former first minister said the only physical contact with the party worker that evening was when he “tapped her on the nose” when he left her working at a computer to go to bed.

He rejected another allegation that in 2011 he had put his hand on the leg of an SNP politician during a short car journey, saying the fixed armrest of his official vehicle would make it “impossible” to do so without being seen by those in the front seats.