Labour leader Jeremy Corbyn has backed the UK being in a permanent customs union with the EU in a speech setting out his approach to Brexit. He said this would avoid the need for a "hard border" in Northern Ireland. Video: Reuters 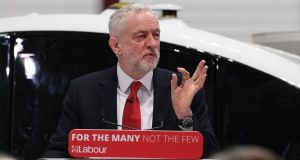 Jeremy Corbyn’s speech on Monday in Coventry, a Labour-supporting city that voted to leave the European Union, has transformed the political weather around Brexit. And like the Siberian wind cutting through Britain this week, the implications of Labour’s policy shift are sending a shiver through Theresa May’s government.

With his move on a customs union, Corbyn has unlocked the arithmetic of a House of Commons where a majority of MPs oppose the prime minister’s hard Brexit. Labour will now whip its MPs behind an amendment to a trade Bill calling for a customs union, which has been tabled by rebel Conservatives.

These Tory rebels, led by the former ministers Anna Soubry and Dominic Grieve, have consistently refused to back opposition amendments on Brexit. But when Labour supported their amendment to the EU withdrawal Bill calling for a parliamentary vote on the final Brexit deal, the rebels defeated the government.

With the risk of an early election and a Labour victory, the Brexiteers could see the prize of leaving the EU next year slip from their grip altogether

Downing Street is so anxious about a defeat on the customs union that the government has postponed the relevant votes until after Easter. Some Brexiteers are urging the prime minister to call the rebels’ bluff by turning the customs-union amendment into a confidence vote.

Tory rebels admit privately that they would find it all but impossible to cast a vote, even on something as important to them as Brexit, that could put Corbyn into Downing Street. But the risk of an early election and a Labour victory is greater still for the Brexiteers, who could see the prize of leaving the EU next year slip from their grip altogether.

Despite claims by the Conservatives that he has betrayed Labour voters who backed Brexit, Corbyn faces little risk of a backlash from his supporters. The customs union does not affect free movement of people, which the Labour leader says will end when the United Kingdom leaves the EU. And few Labour voters backed Brexit in the hope of expanding free trade through new deals with the United States and China that would loosen regulation and weaken protection for workers.

May will deliver her next Brexit speech on Friday, when she is expected to flesh out the “three basket” model of managed regulatory divergence that her Brexit war cabinet endorsed last week. The problem for the prime minister is that the EU has already rejected her proposal.

Corbyn’s wish list includes a deal on single-market access that would exempt the UK from some state-aid rules and give it a say in future EU trade deals. But he still won more praise from business groups on Monday than the prime minister has heard for months.