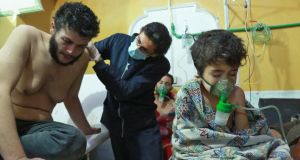 Syrian children and adults receive treatment for a suspected chemical attack at a makeshift clinic on the rebel-held village of al-Shifuniyah in the eastern Ghouta region near Damascus on Sunday. Photograph: Hamza Al-Ajweh/AFP/Getty Images

Russia said on Monday that it would establish a humanitarian corridor to allow civilians to leave rebel-held suburbs of Damascus during a five-hour daily truce, a move that comes two days after a UN Security Council resolution demanded a ceasefire across Syria.

Moscow has been under pressure from western countries to use its influence over Syrian president Bashar al-Assad to help end his regime’s intense bombardment of eastern Ghouta, where more than 500 civilians have been killed in the past 10 days.

Sergei Shoigu, Russia’s defence minister, said the bombing of eastern Ghouta, which is one of the last rebel holdouts, would stop between 9am and 2pm each day from Tuesday.

Russia intervened militarily in Syria’s seven-year civil war in 2015 and helped tip the balance of the conflict in Mr Assad’s favour. But Moscow’s involvement in the conflict has drawn criticism that it has been complicit in the bombardment of civilians in areas controlled by rebels.

The Syrian regime and Russia have said the offensive on eastern Ghouta has targeted terrorists as the rebels have retaliated to the government attacks by shelling Damascus, killing dozens of people.

Dmitry Peskov, Vladimir Putin’s spokesman, said the Russian president on Monday “expressed grave concern over the continued provocations of the terrorists” at a meeting of his security council, but stressed that a UN resolution must be implemented.

UN Security Council members finally voted on Saturday for a 30-day ceasefire across Syria after delays caused by Russia’s reluctance to back the measure. Moscow had argued that the resolution lacked a concrete mechanism for implementation and demanded guarantees that rebel groups would honour a truce.

The Syrian regime’s air and artillery strikes on eastern Ghouta have continued despite the resolution, and at least 22 people were killed on Monday, according to the Syrian Observatory for Human Rights, a monitoring group. Activists in Ghouta say the suburbs have also been hit with poison gas. A chlorine gas attack over the weekend killed one child and wounded 18 others, the activists said.

Russian analysts said the arrangement for Ghouta looked similar to a deal brokered by Moscow last year that eventually allowed Mr Assad to retake control of eastern Aleppo. The Syrian regime recaptured last rebel-held areas of the northern city after a weeks-long bombardment of Aleppo.

Western officials accused Moscow of being complicit in war crimes because of the role of Russian fighters jets in the battle for eastern Aleppo.

Sergei Lavrov, Russian foreign minister, triggered an outcry a week ago when he said the “experience in liberating Aleppo is applicable in eastern Ghouta against the Nusra Front [Islamist group].” – Copyright The Financial Times Limited 2018