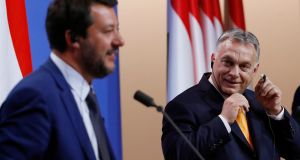 The United Nations human rights office has called on Hungary to stop denying food to migrants detained in a so-called transit zone on the country’s border with Serbia.

The European Union is taking legal action against Hungary over its treatment of asylum seekers and its crackdown on NGOs that assist them, but the country’s nationalist prime minister, Viktor Orban, refuses to soften his anti-immigration stance.

“According to reports, since August 2018 at least 21 migrants awaiting deportation had been deprived of food by the Hungarian authorities – some for up to five days,” Ravina Shamdasani, spokeswoman for the UN high commissioner for human rights, said on Friday.

When Hungary rejects an asylum request and orders an applicant to be expelled, “adults – with the sole exception of pregnant or nursing women – are deliberately deprived of food, which can lead to malnutrition and is both detrimental to their health and inherently inhumane,” she explained.

“We note that the Hungarian authorities had promised to end this practice following an interim measure by the European Court of Human Rights. However... reports suggest the practice is continuing.”

Ms Shamdasani said it breached UN rules on the treatment of people in detention “and violates the rights to food and to health, as well as the prohibition of torture or other cruel, inhuman or degrading treatment or punishment”.

Government spokesman Zoltan Kovacs insisted this week that Hungary’s asylum system was legal, while noting that the authorities were “not responsible for those who have not requested asylum, nor for those whose requests have been denied”.

On Thursday, Mr Orban showed far-right Italian deputy prime minister Matteo Salvini the fence he had built on his country’s southern border in 2015 to keep out refugee and migrants.

Mr Orban called Mr Salvini “the most important person in Europe today” for refusing to accept migrants arriving to Italy by ship from north Africa, and the Italian interior minister lauded his host’s similarly hardline approach.

“Stopping migration at sea, Matteo Salvini drove a nail into the coffin of the pro-migration politicians, to which we also contributed by stopping migration on land,” Mr Orban told Hungarian radio on Friday.

The populist leaders discussed ways to work together after this month’s European elections, which they hope will strengthen nationalist, anti-immigration parties.

The drift of Mr Orban’s Fidesz party towards the far right has irked other members of the European People’s Party, including Fine Gael, and in March the bloc suspended Fidesz pending a report by three EPP elder statesmen.

Mr Orban’s call for co-operation with Mr Salvini, whose Lega party is now forming a far-right alliance with groups such as Alternative for Germany (AfD) and Marine Le Pen’s National Rally in France, has drawn fresh criticism from influential EPP figures.

“I do not believe in co-operation with parties like Le Pen and the AfD who want to leave the EU,” Austrian chancellor Sebastian Kurz said on Friday after talks in Vienna with Markus Söder, the head of Germany’s Christian Social Union party.

“Nothing good would come of it,” the Bavarian leader added.