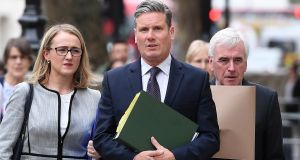 Theresa May’s government and Jeremy Corbyn’s Labour Party have blamed one another for a lack of progress on talks aimed at finding a common position on Brexit. The prime minister told her cabinet that Labour was dragging its feet and did not share the government’s sense of urgency about the negotiations.

“The PM said discussions with Labour had been serious but had also been difficult in some areas, such as in relation to the timetable for the negotiations. The PM said the government’s position was that progress needed to be made urgently as it was vital to deliver on the result of the referendum and for the UK to leave the European Union as soon as possible,” Mrs May’s official spokesman said.

Whitehall sources said that, while the government was eager to win parliamentary approval for a Brexit deal in time to avoid contesting European Parliament elections on May 23rd, Labour was more relaxed about taking part in them. Opinion polls point to a collapse in the Conservative vote next month as pro-Brexit voters flock to Nigel Farage’s newly formed Brexit Party but Labour’s vote appears to be holding up.

Mr Corbyn blamed the government for the slow pace of the talks, saying the Conservatives had come up with no new ideas to break the deadlock.

“We will continue putting our case but quite honestly there has got to be a change in the government’s approach. They cannot keep on just regurgitating what has already been emphatically rejected three times by parliament. There has got to be a change. We have a window of opportunity to bring about that change. I hope the government recognises that . . . and makes the most of it,” he said.

The talks are expected to continue this week and possibly into next week and Whitehall sources suggested the government could introduce the withdrawal agreement Bill next week while negotiations with Labour continue. The Bill, which would enshrine the withdrawal agreement in British law, could be amended to reflect calls from different factions within parliament for a customs union, single market membership or a second referendum.

“It’s a piece of legislation that is required,” the prime minister’s official spokesman said. “We have been working on the withdrawal agreement Bill for a significant amount of time.”

Senior figures in the 1922 Committee of Conservative backbenchers were meeting on Tuesday night to consider proposals to change the rule that has left Mrs May immune from a challenge to her leadership until next December. The prime minister has promised to resign before the next stage of Brexit negotiations but some Brexiteer backbenchers have called on her to announce her departure soon.

Nigel Evans, joint executive secretary of the 1922 Committee, said Mrs May should go without delay.