Chilcot a catalogue of catastrophic failure on part of UK elites

Analysis: Tony Blair took his country to war before peaceful options were exhausted

Sir John Chilcot delivers the Chilcot report, which concludes that Britain's invasion of Iraq in 2003 was based on 'flawed' intelligence. 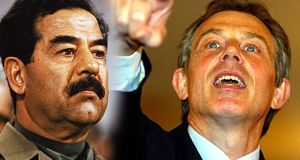 Saddam Hussein and Tony Blair: By the time Blair visited George W Bush at his estate in Crawford, Texas, in April 2002, British thinking about Iraq had hardened. Intelligence chiefs told Blair that Saddam could not be removed without an invasion but that Iraq must disarm or be disarmed.

The language of Sir John Chilcot’s report is cool and restrained but its import is devastatingly clear, for Tony Blair, his cabinet colleagues and Britain’s most senior military and intelligence figures. The report is a catalogue of disaster, and of catastrophic failure on the part of Britain’s political, military, intelligence and diplomatic elites.

Chilcot concludes that Blair took his country to war in Iraq before the peaceful options for disarming Saddam Hussein had been exhausted, so that military action was not a last resort.

Although the formal decision to invade Iraq was not taken until March 2003, Blair had for months been committed to supporting George W Bush’s plan to topple Saddam.

“I will be with you, whatever,” Blair wrote to Bush on July 28th, 2002. “But this is the moment to assess bluntly the difficulties. The planning on this and the strategy are the toughest yet. This is not Kosovo. This is not Afghanistan. It is not even the Gulf War. The military part of this is hazardous but I will concentrate mainly on the political context for success.”

The report also finds that after the attacks on September 11th, 2001, Blair had urged Bush not to rush into military action against Iraq.

But as Bush’s determination hardened in the weeks after the attacks, Blair shifted too, suggesting what he called a “clever strategy” to build the case for regime change over time.

By the time Blair visited Bush at his estate in Crawford, Texas, in April 2002, British thinking about Iraq had hardened.

Intelligence chiefs told Blair that Saddam could not be removed without an invasion but that Iraq must disarm or be disarmed.

The Chilcot report exposes a paralysing groupthink within Britain’s intelligence services, which did not permit any of them to consider the possibility (which turned out to be true) that Saddam did not possess weapons of mass destruction (WMD).

The intelligence chiefs were so eager to support their political masters that Chilcot concludes that Blair did not sex up the notorious “dodgy dossier” about Iraq’s alleged WMD in September 2002.

Although the foreword to the dossier presented the intelligence estimate with a certainty that was not justified, Chilcot says the Joint Intelligence Committee had failed to make clear to Blair that the intelligence had not established beyond doubt that Iraq had continued to produce chemical and biological weapons or was trying to develop nuclear weapons.

“It is now clear that policy on Iraq was made on the basis of flawed intelligence and assessments. They were not challenged, and they should have been,” the Chilcot says.

Blair’s “clever strategy” to build a US-led coalition for military action required progress on the Israeli-Palestinian peace process, United Nations authority for military action and a shift in public opinion in Britain, Europe and across the Arab world.

But when it became clear in March 2003 that there was no chance of securing a majority on the security council for a second resolution which would authorise military action, Blair and his foreign secretary Jack Straw blamed France for blocking action at the UN.

“In the absence of a majority in support of military action, we consider that the UK was, in fact, undermining the security council’s authority,” Chilcot says.

The report does not express a view on whether military action was legal, saying that that issue can only be resolved by a “properly constituted and internationally recognised court”. But it comes close.

“We have, however, concluded that the circumstances in which it was decided that there was a legal basis for UK military action were far from satisfactory,” Chilcot says.

Once Blair decided to take part in the invasion of Iraq, defence chiefs were determined to deploy a sufficiently substantial British military force to give them some influence over US decisions.

But the timescale for planning the British deployment was too short to prepare properly or to adequately equip the troops sent into conflict.

If the planning for the conflict itself was inadequate, plans for the post-conflict occupation were more woeful still and Chilcot is withering about Blair’s failure to anticipate the aftermath of the invasion.

“Mr Blair told the inquiry that the difficulties encountered in Iraq after the invasion could not have been known in advance. We do not agree that hindsight is required. The risks of internal strife in Iraq, active Iranian pursuit of its interests, regional instability, and Al qaida activity in Iraq, were each explicitly identified before the invasion,” he says.

The lack of post-conflict planning was to have fatal consequences for British forces in Iraq, who fought a successful campaign to capture Basra in the south-east of the country, but were ill-equipped to deal with the insurgency which followed.

The troops in Iraq used Snatch land rovers which had been redeployed from Northern Ireland but it soon became clear that the vehicles offered inadequate protection.

Chilcot concludes by outlining some of the lessons to be drawn from the Iraq war, including the need to assess risks, weigh options and set a realistic strategy and to ensure that the civilian and military arms of government are properly equipped for their tasks.

“Above all, the lesson is that all aspects of any intervention need to be calculated, debated and challenged with the utmost rigour. And, when decisions have been made, they need to be implemented fully,” he says.

“Sadly, neither was the case in relation to the UK government’s actions in Iraq.”