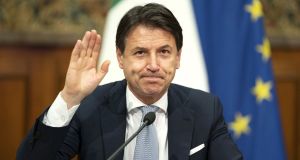 Italy’s prime minister Giuseppe Conte has resigned in an escalation of the political instability that has enveloped the country as it battles both the Covid-19 pandemic and a brutal recession.

On Tuesday morning Mr Conte held a cabinet meeting to inform his ministers of his decision and then met President Sergio Mattarella, to hand in his resignation.

Mr Conte’s decision to resign is a political gamble that he can stay in office by cobbling together a new ruling coalition after his government was stripped of its majority by the resignation of former prime minister Matteo Renzi’s small Italia Viva party in protest against its handling of the pandemic response.

There is, however, no guarantee of his success, and the move creates political uncertainty at a time when the country has suffered more than 85,000 deaths from the coronavirus pandemic and is facing the worst economic crisis since the second world war.

Mr Conte lacks his own political party, having been a political unknown before being unexpectedly named prime minister in 2018. He will have to depend on the continuing support of the leaders of the two largest parties in his current coalition – the populist Five Star Movement and the Democratic party.

Immediately after Mr Conte’s plans to resign were confirmed, Nicola Zingaretti, leader of the Democratic Party, reiterated his backing for the prime minister. “A new government with Conte that is clearly pro-European and supported by a broad parliamentary base,” he wrote on Twitter.

Last week Mr Conte narrowly survived a vote of confidence in Italy’s Senate but his coalition government was left without a majority, meaning it would struggle to pass any meaningful legislation at a time of national crisis.

If Mr Conte is unable to form a new majority, then Mr Mattarella will ask the leaders of Italy’s political parties to find a solution without him, meaning Italy would have a new prime minister as it fights the pandemic.

Another possibility would be for a broader coalition of “national unity” to be formed between the current coalition parties and the right-wing opposition, which could be led by a technocratic prime minister with a mandate to steer Italy out of the current crisis.

New general elections, which only the Italian president has the power to call, are considered unlikely because of the difficulty of holding them during the pandemic.

A former law professor with no history in Italian politics, Mr Conte was in 2018 unexpectedly picked to lead a coalition made up of the populist Five Star Movement and the anti-migration League party, being dubbed “the people’s lawyer” by the Italian media.

Few observers expected him to last in a country famed for its unstable coalitions and which has seen an average of almost a new government every year since the formation of the Italian Republic in 1946.

In 2019 Mr Conte’s first government collapsed and Mr Conte managed to stay on as prime minister in a new more pro-European coalition made up of the once sworn enemies of the Five Star and the Democratic Party. – Copyright The Financial Times Limited 2021