British PM says election will be fought on ‘trust’, claiming she has already set out intentions 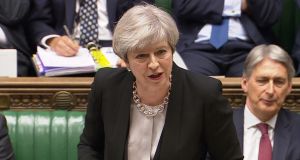 British prime Minister Theresa May won parliament’s backing for an early election on Wednesday, a vote she said would strengthen her hand in divorce talks with the European Union and help heal divisions in Britain.

Ms May surprised allies and opponents on Tuesday when she announced her plan to bring forward an election that was not due until 2020, saying she needed to avoid a clash of priorities in the sensitive final stages of the two-year Brexit talks.

After addressing a rowdy session of the House of Commons, Ms May won the support of 522 lawmakers in the 650-seat parliament for an election on June 8th, an easy victory for the prime minister who could see her majority increase by at least 100 seats in the poll.

Just 13 MPs voted against the motion to hold the early election.

“I believe that at this moment of enormous national significance there should be unity here in Westminster, not division,” Ms May told parliament.

“A general election will provide the country with five years of strong and stable leadership to see us through the negotiations and ensure we are able to go on to make a success as a result, and that is crucial.”

The former interior minister, who became prime minister without an election when her predecessor David Cameron quit after last year’s referendum vote for Brexit, enjoys a runaway lead over the main opposition Labour Party in opinion polls. She has also played up the strength of the British economy, which has so far defied predictions of a slowdown - a key campaign theme that her Conservative Party will use to try to undermine Labour in the election.

A victory would give Ms May a powerful mandate extending until 2022, long enough to cover the Brexit negotiations plus a possible transition period into new trading arrangements with the EU - a prospect that has strengthened the pound.

Earlier, Ms May suggested she won’t use the general election to give voters more detail about the kind of Brexit she wants, instead asking them to trust her to deliver.

Ms May said she had already set out her plans for Britain’s departure from the European Union in a document published earlier in the year. She now needed a mandate from the voters, and the election would give her one, she said.

“It’s about asking the people to trust me, to trust us in government, to give us that mandate to go and get that really good deal,” she told BBC Radio 4’s Today programme.

Ms May also rejected claims that MPs and peers opposed to her plans for Brexit were “saboteurs” seeking to frustrate the will of the people.

The Daily Mail on Wednesday ran the story of her election call under the front page headline “Crush the saboteurs”. Asked whether she agreed with that description of her opponents, Ms May replied: “Absolutely not”.

She said: “Politics and democracy are about of course people having different opinions, different views. It is important in parliament that people are able to challenge what the Government is doing, that there is proper debate and scrutiny, and that’s what there will be.”

The Mail’s headline was strongly condemned by shadow chancellor John McDonnell, who said the election was in danger of being “dragged into the gutter”.

He tweeted: “Theresa May needs to distance herself this morning from Daily Mail’s nasty & divisive front page so election isn’t dragged into the gutter.”

In her radio interview, Ms May said that if she had not brought forward the date of the election, Brexit negotiations would have been coming to a head just as the Government was preparing to go to the polls. The two-year deadline under the Article 50 Brexit process expires in 2019.

Ms May told The Sun “the Europeans might have seen that as a time of weakness when they could push us” but “now we will be much freer”.

The prime minister, who had repeatedly ruled out calling an early election, said her volte-face was motivated by the need to “strengthen our hand in negotiation with the European Union”.

She told the BBC: “I genuinely came to this decision reluctantly, having looked at the circumstances, and having looked ahead at the process of negotiation.

“I want this country to be able to play the strongest hand possible in those negotiations to get the best possible deal because that’s in our long-term interests.”

She also claimed Labour, the Liberal Democrats and SNP were intent on “frustrating the Brexit process”.