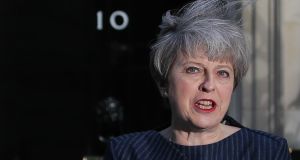 Theresa May has promised to put Brexit at the heart of her campaign for a fresh electoral mandate on June 8th, less than a year after Britain voted in a referendum to leave the European Union. In a statement outside 10 Downing Street which took Westminster by surprise on Tuesday morning, the prime minister said she needed a bigger parliamentary majority to strengthen her hand in negotiations with the EU.

Labour said its MPs will support a motion in the House of Commons today to hold the election three years ahead of schedule under the Fixed Term Parliaments Act and Parliament will be dissolved on May 2nd. Ms May, who ruled out an early election a number of times since becoming prime minister last year, said she had changed her mind because opposition parties were seeking to undermine her approach to Brexit.

She said the threat that Labour, the Liberal Democrats and the Scottish National Party (SNP) would vote against the final deal on Brexit weakened her position in talks with the EU.

“Our opponents believe because the government’s majority is so small, that our resolve will weaken and that they can force us to change course. They are wrong. They underestimate our determination to get the job done and I am not prepared to let them endanger the security of millions of working people across the country. Because what they are doing jeopardises the work we must do to prepare for Brexit at home and it weakens the government’s negotiating position in Europe, ” she said.

British and EU negotiators said the election would not affect the timetable for Brexit negotiations. EU leaders will meet in Brussels on April 29th to agree negotiating guidelines but substantive negotiations are not expected to begin for another month. Brexit secretary David Davis said an early election was in the national interest because opposition parties were frustrating the government’s strategy in the negotiations.

“This is about getting a mandate from the British people to deliver the best possible outcome. It is not just about delivering Brexit, it is also about delivering the other aspects of her prime ministership which she was not elected for,” he told the BBC.

A Guardian/ICM poll conducted after Ms May’s announcement yesterday found that 55 per cent of voters backed her decision to call a snap election, with 15 per cent opposing it. The poll put the Conservatives on 46 per cent, with Labour on 25 per cent, the Liberal Democrats on 11 per cent and Ukip on 8 per cent.

A number of other polls in recent days show the Conservatives more than 20 points ahead of Labour, suggesting a landslide victory for Ms May on June 8th.

1 How one couple’s weekend away resulted in 30 Covid-19 cases
2 Covid-19: College students having break and middle-aged people in rural pub linked to large clusters
3 Taoiseach tells TD to ‘cop on’ over criticism of contact tracers asking about pubs
4 Leaving Cert Q&A: How did the errors happen and will students get new CAO offers?
5 Miriam Lord: Government all out of ideas. Dial 1800 – Help
Real news has value SUBSCRIBE