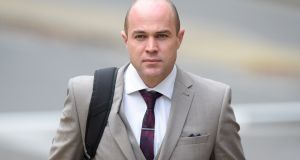 Emile Cilliers has been given a life sentence with a minimum term of 18 years after being found guilty of trying to murder his wife. Photograph: Ben Birchall/PA Wire

An army sergeant has been given a life sentence with a minimum term of 18 years after being found guilty of trying to murder his wife by tampering with her parachute before a skydive so he could begin a life with a secret lover and use a life insurance payout to clear his debts.

Emile Cilliers, 38, arranged the jump for his wife, Victoria, soon after the birth of their second child, but he removed vital components from her parachute, causing her to fall 1,200 metres. Victoria, a physiotherapist, survived after landing in a soft, ploughed field but was seriously injured.

Sentencing Cilliers, Mr Justice Sweeney said: “This was wicked offending of extreme gravity. Your offending was extremely serious with your two attempts to murder your wife. They were planned and carried out in cold blood for your own selfish purposes.

“That your wife recovered at all was miraculous; she undoubtedly suffered severe physical harm and she must have suffered psychological harm in the terror of the fall and since.

“She appears to have recovered from the physical harm but not, having seen her in the witness box at length, from the psychological harm.”

In a round of television and newspaper interviews after the verdicts, Victoria Cilliers said she still could not see her husband as a killer and was controlling her emotions for the sake of their two children.

She told ITV: “I’ve been though every emotion under the sun. I’ve had plenty of time to think about things, which is probably why I’m not overtly angry, partly because I’m still in shock, slightly stunned about the whole thing. Also, I’ve got two young children. I’m the sole carer for them. I can’t be angry, bitter, really emotional. I need to keep an even keel for them.”

She said she had spent the past three years telling her children their father had gone away for work, revealed she had no plans for divorce and intended to visit Cilliers in prison to confront him about what happened.

A police investigation was launched after it was discovered that pieces of kit called slinks, which connect the canopy to the harness, had been removed from the parachute rig.

Detectives found that Cilliers, who has six children in total, was having affairs with two women and had discussed beginning a new life with one of them. He had also been in contact with sex workers, had heavy debts, was being chased by loan companies and increased an insurance policy so he would benefit if his wife died.

Cilliers, of the Royal Army Physical Training Corps, told Winchester crown court that a “random killer” may have sabotaged his 42-year-old wife’s rig at the Army Parachute Association at Netheravon, Wiltshire, on April 5th, 2015. He also suggested the jury needed to consider whether she had tampered with her own parachute because she wanted to kill herself.

A jury found Cilliers guilty of two counts of attempted murder, one related to the jump, and the other to his tampering with a gas fitting at the couple’s home in Amesbury, Wiltshire, a week before the jump in an attempt to try to cause an explosion while he was at work.

The court was told that in a pre-sentence report Cilliers was assessed as posing a high risk to adults, particularly partners, and a medium risk to children. Victoria Cilliers was present for the hearing but asked for her victim impact statement not to be read out.

The senior investigating officer welcomed the sentence. DI Paul Franklin said: “From the outset, Emile Cilliers showed no remorse for what he had done. He lied all the way through two trials, but in the end justice won out with the guilty verdicts and now a long prison sentence.

“Emile Cilliers is dangerous; he’s a cold, callous, selfish man who cares only about money and his sexual conquests. Today’s sentencing means that society is a little safer with him locked away.

“I also hope this result means that there can now be some closure for his wife, Victoria, and her family, who were victims in this.

“Wiltshire police is dedicated in bringing offenders like Cilliers to justice as well as giving help to those who find themselves in subtle abusive and coercive relationships - like the one highlighted here.

“Often, the abuse is not obvious because there may be no physical telltale signs or injuries. However, a victim suffering emotional and financial abuse, as in this case, can be just as deeply traumatised.” – Guardian