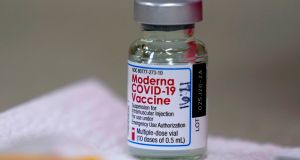 Britain’s medical regulator on Friday approved Moderna’s Covid-19 vaccine for use, the health ministry said, adding that it had agreed to purchase an additional 10 million doses as it eyed a spring rollout of the shot.

Three Covid-19 vaccines have now been approved for use in Britain, with Pfizer/BioNTech’s shot and one developed by Oxford University and AstraZeneca already being administered.

The Moderna shot is not expected to play a part in the first stage of Britain’s vaccine rollout, which needs to see 2 million vaccinations a week being given for the next six weeks in order to hit a target of inoculating high priority groups by mid-February.

Instead, supplies will begin to be delivered to the UK from the spring once Moderna expands its production capability.

“We have already vaccinated nearly 1.5 million people across the UK and Moderna’s vaccine will allow us to accelerate our vaccination programme even further once doses become available from the spring,” health minister Matt Hancock said.

Britain now has 17 million doses of Moderna’s vaccine on order, after waiting for trial data before making a commitment, putting it behind the United States and the European Union in the queue for the shot.

Moderna’s vaccine was 94 per cent effective in preventing disease in late-stage clinical trials, and it has already been given regulatory approval for use in the United States, Canada, the European Union and Israel.

The United States began rolling out the Moderna vaccine in late December, while the company has said the process will get underway in the EU next week.

“We appreciate the confidence shown by the UK MHRA in Covid-19 Vaccine Moderna with this decision,” said Stephane Bancel, chief executive officer of Moderna, referring to the medicines regulator.

Britain initially prioritised securing doses from Pfizer and AstraZeneca and was the first country to approve those vaccines, but has spread its bets and secured doses of 7 different vaccine candidates in all.

Britain is attempting to vaccinate the elderly, the vulnerable and frontline workers – around 15 million people – by mid-February, to ease a new strict lockdown imposed after a spike in cases to daily records.

Although Moderna’s vaccine will not help meet that initial target, it will help ease supply constraints that Hancock has cited as being a limiting factor in the rollout.

“This is excellent news and a further crumb of comfort amid the huge levels of Covid-19 currently circulating around the UK,” said Michael Head, senior research fellow in global health at the University of Southampton.

“When these Moderna vaccines arrive, they will help to ease any bottlenecks or delays in the administration programme.” –Reuters