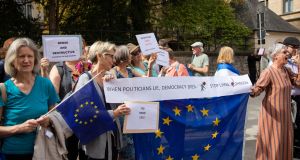 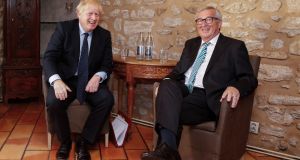 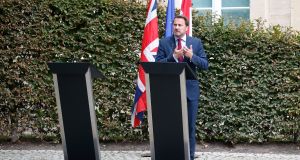 Talks in Luxembourg between Boris Johnson and Jean Claude Juncker failed to make any ground on the central challenge of the Northern Ireland backstop on Monday as EU officials insisted that the UK has still failed to produce proposals for a specific, legally operable alternative.

The British prime minister and the European Commission president met for a heavily hyped working lunch aimed at “taking stock” of the state of play in talks. But its aftermath descended into farce as noisy Remain demonstrators forced Mr Johnson to abandon a planned open-air press conference.

His departure was followed by a solo performance by Luxembourg prime minister Xavier Bettel, who rounded on his absent guest over the handling of the Brexit mess as entirely “homemade problems” which had created a “nightmare” for EU citizens.

He would not comment on Mr Johnson’s apparent willingness to defy parliament and the law, save to observe acidly “that would not happen in Luxembourg”. “Don’t make the EU the bad guy,” Mr Bettel added, as the podium meant for Mr Johnson beside him sat conspicuously empty.

Mr Johnson and Mr Juncker agreed to accelerate the ongoing talks from twice weekly to daily at a political level, and to bring in Brexit secretary Stephen Barclay for face-to-face discussions with chief negotiator Michel Barnier.

“We need to accelerate talks if we are going to make any progress,” Mr Johnson told the BBC.

Brussels was less optimistic. The problem, sources said, is not the pace of talks but the absence of content and of new proposals from the UK. Negotiators say they are bewildered by Mr Johnson’s repeated insistence that progress is being made.

A spokesman for the commission said of the talks: “President Juncker underlined the commission’s continued willingness and openness to examine whether such proposals meet the objectives of the backstop. Such proposals have not yet been made.”

Mr Johnson, however, insisted afterwards on Sky News that he thinks there is still time for a deal to be done, “just the right amount of time”, by the end of October. “If that is not possible, the UK will leave by 31st October.”

Though he admitted to the BBC that the talks were in a “difficult moment” he insisted that “Yes, there is a good chance of a deal, yes I can see the shape of it. Everybody can see roughly what could be done,” he said. He said a deal was not necessarily “in the bag”.

The commission said it “will remain available to work 24/7. The October European Council will be an important milestone in the process. The EU27 remain united.”

A statement from Downing Street said that “the prime minister reconfirmed his commitment to the Good Friday/Belfast Agreement and his determination to reach a deal with the backstop removed, that UK parliamentarians could support.

The prime minister also reiterated that he would not request an extension.”

1 Tuberculosis vaccine ‘potential game-changer’ in Covid-19 fight
2 Coronavirus: Situation in Ireland ‘misrepresented’ because of limited testing
3 Coronavirus Q&A: How to shop safely during Covid-19
4 Coronavirus: About 600 private consultants in limbo after State deal
5 Ireland has strategy to ‘break the chains’ of coronavirus - WHO’s Mike Ryan
Real news has value SUBSCRIBE