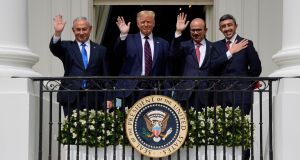 The new agreements signed by the Emirates and Bahrain to normalise relations with Israel involve a range of ties but are different from the peace treaties Israel signed with Egypt and Jordan. Those two countries fought Israel and made peace in the belief that Israel would end the occupation of Palestinian territory and a Palestinian state would emerge.

The Emirates and Bahrain did not dispatch troops to fight Israel alongside Egyptians and Jordanians, and have now signed peace deals and partially normalised relations despite popular disapproval. Syria, Iraq, and Lebanon have not done the same.

A poll conducted by the Washington Institute for Near East Policy found Arab concern over Palestine came second only to worries about Iran. Normalisation without peace is seen by most Arabs as breaking Arab ranks, violating the boycott of Israel and abandoning the 2002 Arab peace plan calling for full Israeli withdrawal from Arab territory occupied in 1967 in exchange for normalisation with the Arab world.

Since they sent foreign ministers to Washington to sign the deals rather than attending themselves, the Emirati and Bahraini rulers demonstrated they understood the extreme sensitivity of normalisation. Gulf expert Giorgio Cafiero tweeted that “Israel formalizing relations [with] unelected Arab [rulers] is not the same as Israel making ‘peace’ [with] Arab people.”

Saudi Arabia has refused normalisation but allowed air traffic between the Emirates/Bahrain and Israel to fly through its air space. Riyadh has been cautious as polls show 80 per cent of Saudis consider the Palestinian cause the Arab cause. Dissent is not tolerated in all three countries.

If US president Donald Trump wins a second term, his regional negotiator and son-in-law Jared Kushner could step up pressure on other Arab states to normalise and proceed with his Middle East plan, the so-called “deal of the century”, which will finish off the two-state solution and relegate five million Palestinians to permanent Israeli occupation.

The Emirati and Bahraini deals could prolong the destructive Yemen war since the US is unlikely to put pressure on the Emiratis and Saudis to make peace with the Houthi rebels.

The normalisation deals could also launch a regional arms race. The Emirates expects to obtain US weaponry, including F-35 fighter planes, while Israel is determined to secure weaponry beyond the $38 billion (€32bn) in military hardware provided by the US to Israel more than 10 years to maintain its military “edge” over the Arabs.