Brexit: Everyone has a plan until they get punched in the mouth

Analysis: Theresa May brought clarity but it may not count for much when the EU hits back

British prime minister Theresa May has committed to maintaining the common travel area with the Republic. 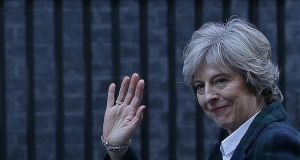 Theresa May’s unambiguous declaration that Britain will make a clean break with the European Union has brought welcome clarity ahead of the start of formal Brexit negotiations. By prioritising immigration control, ruling out membership of the single market and rejecting the key elements of the customs union, the prime minister has removed some important issues from the negotiating table.

There was good news for Ireland, insofar as maintaining the common travel area is one of May’s 12 stated objectives in the talks. But her commitment to avoiding a return to “the borders of the past” is undermined by her determination to leave the customs union’s common commercial policy and common external tariff.

For most of its history, the Border was a customs barrier rather than a security border, and customs controls will return in some form if Britain and the EU adopt a different external tariff. The prime minister’s official spokeswoman said later that Britain would aim to make such controls as “frictionless” as possible, perhaps through the use of technology.

Britain has an interest in making customs clearance with the rest of the EU as a whole as frictionless as possible, not least because many UK-based manufacturers have supply chains stretching across the continent. Even the most unobtrusive customs borders, however, such as that between Sweden and Norway, require customs clearance of some kind and involve spot checks on vehicles crossing the frontier.

The prime minister was addressing an audience of foreign diplomats and she was keen to stress that Britain saw a strong and successful EU as in its own interest. And her acceptance of the need for an “implementation phase” and some continued payment into the EU budget after Brexit helped to reassure financial markets.

But her tone was harsh at times, notably when she warned the EU against seeking to impose a punitive deal on Britain. No deal would be better than a bad deal, she said, an implicit threat to walk away from the talks without an agreement if Britain does not secure access to the single market it is determined to leave.

Echoing last weekend’s threat from her chancellor, Philip Hammond, she warned that Britain could change its economic model by cutting corporate tax rates and that the EU could be shut out of financial services in the City of London.

Seven months after the referendum, Britain now has a plan for leaving the EU but as Mike Tyson famously observed, everyone has a plan until they get punched in the mouth. Over the next few months, the blows may come not only from the prime minister’s negotiating partners in Brussels, but from the economic consequences of the radical course she has plotted for her country.