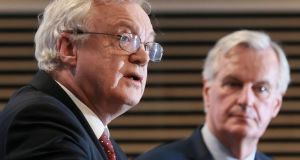 Britain’s Brexit secretary David Davis and Michel Barnier (right), the EU’s chief Brexit negotiator speak to reporters at the end of the 6th round of Brexit talks in Brussels on Friday. Photograph: EPA

Britain’s Brexit secretary David Davis has insisted he will not accept any solution to the issue of the Northern Ireland Border that damages the “constitutional and economic integrity of the UK”.

Mr Davis said there had been “frank discussions” on the issue in the latest round of negotiations in Brussels after a leaked paper suggested a hardening of the European Commission’s stance.

The European Union’s chief negotiator Michel Barnier said “some progress” had been made in the Brexit talks but more needed to be done - including on the so-called divorce bill - before he would be able to recommend moving on to discussions about a trade deal.

On Northern Ireland, Mr Barnier said: “We have to ensure a common reading of the conditions, consequences and implications of Brexit on the Good Friday Agreement and the Common Travel Area.

“This should lead us to identify the technical and regulatory solutions necessary to prevent a hard Border while preserving the integrity of the single market.

“The unique situation on the island of Ireland requires specific solutions.”

Mr Davis said: “We respect the European Union desire to protect the legal order of the single market and customs union.

“But that cannot come at cost to the constitutional and economic integrity of the United Kingdom.”

Although there would need to be “specific solutions” for the unique position of Northern Ireland “this cannot amount to creating a new border inside our United Kingdom”.

Mr Davis said the UK was “ready and willing” to engage with Brussels “as often and as quickly as needed” ahead of the December 14th and 15th summit of EU leaders.

“But we need to see flexibility, imagination and willingness to make progress on both sides if these negotiations are to succeed and we are able to realise our new deep and special partnership.”

Mr Barnier refused to be drawn on speculation that Brussels was concerned that Theresa May’s government could collapse following recent upheaval which has seen two cabinet ministers quit, although he admitted the situation was being watched closely.

“I am not going to comment on the internal political situation in the United Kingdom,” he said. “We are, of course, watching it very closely.”

The latest round of talks in Brussels came as Mrs May committed to write the date of the UK’s departure from the EU into law - and warned would-be Tory rebels that any attempt to prevent Brexit would not be tolerated.

Amendments to the European Union (Withdrawal) Bill going through Parliament will spell out that the UK’s membership of the EU will end at midnight in Brussels, on March 29th, 2019.

Mrs May’s fragile grip on power, relying on DUP votes for a Commons majority, means the government is vulnerable to any Tory rebellion.

Writing in the Daily Telegraph, the prime minister said: “We will not tolerate attempts from any quarter to use the process of amendments to this Bill as a mechanism to try to block the democratic wishes of the British people by attempting to slow down or stop our departure from the European Union.” - PA