Brokenshire to discuss impact of Brexit on NI with EU figures 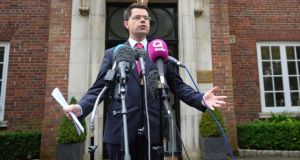 Northern Ireland Secretary James Brokenshire: “There must be no physical infrastructure at the Border.” Photograph: Mark Marlow/PA Wire

Northern Ireland Secretary James Brokenshire is to meet senior European Union figures in Brussels to emphasise the unique issues affecting the North as the UK prepares to leave the EU.

On Monday he will also update chief Brexit negotiator Michel Barnier and other senior EU figures on the current political situation in Northern Ireland.

Ahead of a speech in Brussels Mr Brokenshire spoke of the British government’s commitment to securing a Brexit agreement that delivers for all parts of the UK.

“As Secretary of State I am fully committed to ensuring that, as negotiations progress, the interests of Northern Ireland are protected and advanced, through the development of specific solutions to address its unique circumstances,” he said.

Mr Brokenshire said it would be better if an Executive was in place as the Brexit negotiations progressed and spoke of plans to make the most of the opportunities he believes the UK’s departure from the EU presents.

He also reiterated that top priorities for the British government are to maintain the Common Travel Area and preserve the 1998 Belfast Agreement.

“Northern Ireland is the only part of the UK to share a land border with an EU member state, and we recognise the flow of traffic across the Border on a daily basis for people going about their daily business is essential as we move forward. There must be no physical infrastructure at the Border.

“I believe that specific solutions can be found to Northern Ireland’s unique circumstances, and the UK government will do all in its power to secure an outcome that works for all parts of the United Kingdom. I will be reinforcing this message during my discussions.”

Last week the DUP and Sinn Féin missed another deadline to get a deal to form a devolved government in the North following its collapse in January.

At the weekend DUP deputy leader Nigel Dodds and Sinn Féin leader Gerry Adams both said their parties remained committed to continued engagement but no further talks are scheduled.

SDLP leader Colum Eastwood has called for the British and Irish governments to “decisively intervene to end the drift and confusion”.

He wants both governments to set a timetable for multiparty talks between now and Christmas.

Mr Eastwood said: “As co-guarantors, it is now the role of the two governments to grab hold of these talks and give everyone certainty.”