Frankfurt for the banks, Paris for the culture, Amsterdam for a friendly regulator 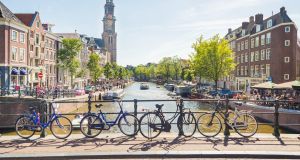 Amsterdam may be less attractive to bankers than to high-speed traders. Photograph: iStock

Frankfurt has the banks, and Paris has the culture, but for trading firms looking for a post-Brexit European home, Amsterdam may have the best attraction of all: a friendly regulator.

The Dutch Authority for the Financial Markets already presides over the most important cluster of European proprietary trading firms - the high-speed giants of financial markets - outside the UK. The Dutch regulator allows such firms to trade directly with big pension funds and insurance companies without treating them as clients, a distinction that reduces their legal and regulatory burden.

Three local firms, Optiver, IMC and Flow Traders, are already among the world’s biggest traders of options, cash equities and exchange-traded funds. That’s given the AFM regulatory experience of high-frequency trading, one of the least known yet fastest-moving areas of finance.

“To the great credit of our regulator, they have kept pace very well with innovation in financial markets,” Diederik Dorst, global head of legal and compliance at Flow Traders, said in an interview.

“They are highly pragmatic and knowledgeable and that’s a selling point for Amsterdam. The strongest case for Amsterdam is its trading heritage over the last few centuries.”

It’s a trading culture that stretches back centuries. That includes being the home of the world’s first formal stock exchange. Although the British East India Company was the world’s first joint-stock company, the Dutch East India Company was the first listed company. The firm paid its shareholders an annual dividend of 18 percent for almost 200 years.

The Dutch regulator had held talks with 100 other financial firms including prop traders, trading platforms and asset managers since Britain voted to leave the EU, according to board member Gerben Everts. It’s willing to “scale up” by adding more people if the influx of firms continues, he said.

“The AFM has a frequent dialogue with the trading community in Amsterdam and as such, the AFM has had the chance the follow and keep up with the ongoing technological developments,” the regulator said in a statement. “We keep investing in experienced staff and understanding of the market trends and contribute to appropriate new regulation.”

There have already been some successes: Amsterdam has attracted Japanese banks Mitsubishi UFJ Financial Group and Mizuho Financial Group, which are both bolstering their units in the Dutch city. Mitsubishi is also considering the city as the EU site for its securities operations. RBS also plans to move some positions to the Dutch financial capital.

Amsterdam may be less attractive to bankers than to high-speed traders. After bailing out their largest banks in the global financial crisis, Dutch authorities capped bonuses at 20 per cent of salaries, well below the 200 per cent EU-wide limit. Proprietary traders are exempt from the bonus caps on the theory that they would never require a taxpayer bailout.

“In a world where bonuses are a substantial part of income, the flexibility on offer fails to address the concerns of foreign banks and may form an obstacle to them choosing the Netherlands,” said Arnold Keizer, an incentives lawyer at Allen and Overy in Amsterdam.

RBS has said it will move 150 jobs to Amsterdam and still has a licence in the Netherlands that it acquired as part of the ill-fated 2008 purchase of ABN Amro. Chief executive Ross McEwan argued on the lender’s last earnings update that the chief executive of its markets division, Chris Marks, “is confident that he can find the right people in Amsterdam,” despite the challenges posed by the limits on bonuses.

Tradeweb and MarketAxess, the two trading venues that picked Amsterdam, identified the AFM as their main reason for moving.

“We looked at multiple places: we looked at locations across Europe,” said Enrico Bruni, Tradeweb’s head of Europe and Asia, in an interview.

“We respect the regulatory environment, the experience of the regulator.” MarketAxess said the AFM’s “sophisticated” approach made Amsterdam more appealing than rivals such as Dublin or Frankfurt.

Algorithmic trading firms need good communications links. These traders become notorious thanks to Michael Lewis’s 2014 book ‘Flash Boys’, which alleged that the firms used their superior trading speed to front run conventional investors. While many of the firms have different ways of making money than just speed, they all need the fastest computers when they hedge their trades. They all dispute the allegations in Lewis’s book.

On the speed front, the Dutch city may also have an advantage. Amsterdam has greater capacity in private data links than any of its continental rivals, according to a new report from Equinix, a US company that owns many of the data centres that host these connections. The city has installed bandwidth of 83 terabytes per second, far from London’s 159 terabytes, but still better than third-placed Frankfurt’s 74 terabytes.

Other financial firms are still assessing the city. Mark Hemsley, the chief executive of Bats Europe, part of CBOE Holdings , said soon after the Brexit vote that the company would choose between Amsterdam and Dublin for its new home. After more than a year of research, Bats has yet to make up its mind. According to Hemsley, the city it picks will be the one that gives it “the flexibility to act as an entrepreneurial exchange.”