Relations have deteriorated sharply between neighbouring states in past three years 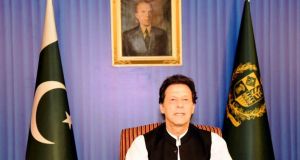 India has made peace overtures to Pakistan’s newly installed prime minister, Imran Khan, by offering a “meaningful and constructive” engagement between the two nuclear-armed rivals who have fought several wars since independence 71 years ago.

In a letter to Mr Khan after he was sworn into office over the weekend, India’s prime minister, Narendra Modi, called for the building of “good neighbourly ties” in a bid to further security and prosperity in the South Asian region.

Official sources said Mr Modi also underlined the need to render the subcontinent free of terror and violence in order to focus on development.

In response, Pakistan’s newly appointed foreign minister, Shah Mehmood Qureshi, said that dialogue was the only way forwards between the neighbours, fuelling hopes of a thaw in their security relationship.

Mr Qureshi confirmed that Mr Modi had written to Mr Khan, congratulating him on his victory in the general elections, and backed the suggestion that the two sides open talks.

“We know the issues [between the two countries] are tough and will not be solved overnight, but we have to engage” Mr Qureshi said.

Bilateral security, diplomatic and political relations between India and Pakistan have deteriorated sharply over the past three years on multiple counts.

During this period their two armies frequently exchanged artillery, mortar and small arms fire across their disputed border in northern Jammu and Kashmir state, killing scores of security personnel and civilians and forcing tens of thousands to flee their homes.

Kashmir is divided between the neighbours, both of who claim the disputed Muslim-majority principality in its entirety.

Two of their three wars since independence from British colonial rule in 1947 were fought over Kashmir, and in 1999, soon after both countries became nuclear powers, their armies clashed once again in the province’s Himalayan Kargil region for 11 weeks.

More than 1,200 soldiers from both sides died in the conflict, which threatened to escalate into a nuclear exchange, but was defused by US intervention.

The Kashmir border, known as the line of control, is one of the world’s most heavily militarised frontiers, where more than 300,000 Indian and Pakistani soldiers, backed by heavy artillery and missiles, face off against each other.

India claims the Pakistan army violates the 2003 ceasefire along the line of control to facilitate the infiltration of armed militants into Kashmir to boost the insurgency raging in the state since 1989 for an independent Muslim homeland, an insurgency that has claimed more than 70,000 lives.

Meanwhile, senior officials in Delhi are wary of dealing with Mr Khan, believing that Pakistan’s security and nuclear policy, especially with regard to India, is determined largely by its powerful military and not by its civilian government.

The Pakistani military ruled its country directly for 31 years after independence and indirectly for most of its existence.

“Both countries are warily gauging each other, apprehensive of taking the first step towards normalising relations in case things go wrong like in the past,” said political and diplomatic analyst Seema Mustafa of the Centre for Policy Research in Delhi.