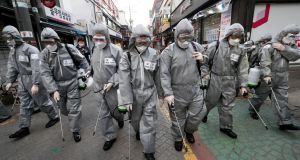 Italy’s government is set to close cinemas and theatres and ban public events countrywide in an attempt to contain the coronavirus outbreak, according to a draft decree drawn up on Wednesday.

The decree orders “the suspension of events of any nature . . . that entail the concentration of people and do not allow for a safety distance of at least one metre to be respected.”

The draft decree also tells Italians to avoid hugging and shaking hands to prevent as much as possible a further spread of the potentially deadly illness which has been mainly concentrated in the country’s northern regions.

Earlier on Wednesday the government decided to close schools and universities across the country until mid-March in a further attempt to contain the worst coronavirus outbreak in Europe.

The country’s Ansa news agency reported that the government had already shuttered schools and universities in the worst-affected regions in northern Italy some 10 days ago and quarantined a handful of towns at the epicentre of the outbreak.

However, the contagion has spread, with at least 79 people dying and more than 2,500 infected.

The wider measure, also applying to pre-schools, will come into force on Thursday and could affect up to 8.7 million children and students.

Ireland’s Department of Foreign Affairs on Tuesday night advised the Irish public against non-essential travel to the Emilia-Romagna and three other regions in northern Italy badly affected by the virus after the State’s second case was confirmed.

Japan is enforcing a complete school shutdown that is due to last until April.

It was also announced that the Coppa Italia semi-final second leg between soccer sides Napoli and Inter Milan, which was scheduled for Thursday evening, has been postponed because of the coronavirus outbreak.

The other semi-final return leg between Juventus and AC Milan, which was due to be played on Wednesday, was postponed on Tuesday evening.

With thousands of sick people waiting for hospital beds in Daegu, the South Korean city at the centre of the worst outbreak outside mainland China, the total number of confirmed cases in the country increased to 5,328, with at least 32 deaths, the Korea Centres for Disease Control and Prevention said.

Most cases were in and around Daegu, the country’s fourth-largest city, where the flu-like virus has spread rapidly through members of a fringe Christian group. Health officials expect the number of new cases to be high for the near future as they complete the testing of more than 200,000 members of the Christian sect, as well as thousands of other suspected cases from smaller clusters.

“In order to overcome Covid-19 as quickly as possible and minimise the impact on the economy, it is necessary to proactively inject all available resources,” he added.

Iran on Wednesday announced that there had been 586 new cases in the previous 24 hours, bringing the total to 2,922. The total number of associated deaths stands at 92, a day-on-day increase of 15.

Tensions over how to contain the spread of coronavirus have escalated in the United States, with the death toll climbing to nine as politicians expressed doubts about the government’s ability to ramp up the speed of testing.

What about the United States?

All of the deaths have occurred in Washington state, and most were residents of a nursing home in suburban Seattle. The number of cases in the US overall has passed 100 scattered across at least 14 states, with 27 in Washington.

In New York state, a second coronavirus case was confirmed in a 50-year-old man with an underlying respiratory illness. He is hospitalised and in a serious condition.

New York governor Andrew Cuomo told reporters at a press conference on Tuesday that the patient had not travelled to countries considered the epicentre of the outbreak, but had visited Miami recently. Because the patient is not believed to have come into contact with other infected people, health officials said it raises concerns that the pathogen is spreading locally.

In England, the organisers of the London Book Fair, due to take place from March 10th to 12th, have cancelled the event. They said the fair would return “better than ever” next year. – Agencies