The third-rate, the lightweight and the school mate – Boris Johnson’s cabinet 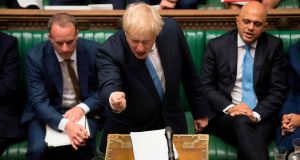 Boris Johnson’s rumbustious, two-hour turn at the dispatch box on Thursday morning was shameless, cynical and evasive. And sheer delight for the benches behind him.

On his first outing in the Commons as prime minister, Johnson made no effort to pose as a statesman as he deployed the lowest tricks of the debating society to tease, torment and ridicule the opposition. But after three years beneath the gloomy penumbra created by Theresa May, it was a welcome change for Conservative backbenchers to have something to cheer and laugh about.

There were gaps in the green benches behind Johnson as many of his Tory critics chose to stay away. May was at Lord’s to watch the England-Ireland cricket match, along with former ministers Greg Clark and David Gauke. Others were content to allow the new prime minister to have his day and to wait until after the summer recess to strike.

In his opening statement, Johnson hit the same, populist issues as in his speech on the steps of Downing Street a day earlier, promising more police, tougher sentences for violent criminals and more money for schools and hospitals. But he began by promising that, after Britain leaves the EU on October 31st, he would make it the greatest place on earth.

“And when I say the greatest place on earth, I’m conscious that some may accuse me of hyperbole. But it is useful to imagine the trajectory on which we could now be embarked. By 2050 it is more than possible that the United Kingdom will be the greatest and most prosperous economy in Europe – at the centre of a new network of trade deals that we have pioneered,” he said.

He said his preference was to leave the EU with a deal but suggested that he would not seek to negotiate with the other 27 member states until they agreed to delete the Northern Ireland backstop from the withdrawal agreement. And he explicitly rejected the December 2017 joint report agreed between Britain and the EU that created the backstop.

Johnson’s demands are unacceptable to the EU, as Michel Barnier was quick to point out in a letter to EU ambassadors shortly after the Commons statement. So has Johnson set Britain on course for a no-deal Brexit?

Now that MPs have voted to block a suspension of parliament in the weeks before the October 31st deadline, they will have opportunities to try to thwart Johnson’s plans. Even if they are unable to find a procedural stratagem to force him to seek an extension of article 50, they could block the legislation needed to make a no-deal Brexit workable in practice.

Such obstruction would give Johnson a pretext for calling an election to seek a mandate for a no-deal Brexit, portraying himself as the champion of those who voted Leave in 2016. His team are confident that his move into Downing Street will give the Conservatives a poll boost, partly through the return of disenchanted supporters from the Brexit Party.

In Dominic Cummings, former campaign director of Vote Leave, Johnson has a strategist who understands the issues that resonate with Leave voters. And his first hours in government have shown that he is preparing to be on a permanent campaign footing.

Labour remains at sea over Brexit and Jeremy Corbyn’s spokesman on Wednesday insisted it was not a Remain party, despite recent moves towards a more coherent position of seeking to reverse Brexit. Johnson hopes that Labour Leave voters in the midlands and the north of England will move to the Conservatives while the Liberal Democrats eat into Labour’s vote in the south east.

An early election could prove disastrous for the Conservatives, however, as the limits of Johnson’s electoral appeal becomes apparent. His vengeful purge has left him with a cabinet made up of the third-rate, the lightweight and the school mate.

He remains toxic in Scotland and could lose seats there to the SNP and in the south west of England to the Liberal Democrats. The electoral map after the 2017 general election has left the Conservatives defending numerous marginal seats, while Labour MPs sit on huge majorities.

In his note to EU ambassadors, Barnier suggested they remain firm and united as they “follow carefully the further political and economic reactions and developments in the UK”. Dublin should do likewise.