Northern Ireland’s economy is threatened by more than Brexit

John FitzGerald: The North faces decades of inertia unless there is urgent reform 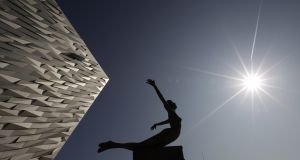 The Northern Ireland economy is likely to be worse affected by Brexit than economies in other UK regions. The Brexit shock will compound the difficulties of what is already a very weak regional economy.

However, the potential fracturing of the United Kingdom itself and the rise of English nationalism could bring even greater destabilisation in the longer term.

Because of the weakness of the Northern Ireland economy, the options for dealing with this changing external political and economic environment are very limited.

Any cutback in funding would add to the negative shock of Brexit. The best economic prospect for Northern Ireland is that Westminster continues to support the North over the coming decade and that, in return, Northern Ireland implements major reforms to move its economy onto a sustainable footing.

However, in the next UK parliament, whenever that is, Northern Ireland may no longer be a popular cause for public support.

A century ago, when the Irish Free State and Northern Ireland were established, the North had a strong manufacturing base, unlike the rest of the island. However, the economic conditions between the wars were such that Northern Ireland grew very slowly in its first 20 years, even more slowly than the South.

The second World War saw a major increase in demand for ships and other industrial output from Northern Ireland. As a consequence, the Northern Ireland economy performed very well between 1938 and 1960. Even in the 1960s progress continued, attracting significant new business.

To deal with this danger, the UK government dramatically increased transfers to the North from about 7 per cent of its GDP in 1968 to about 17 per cent. Many public sector jobs were created to replace disappearing private sector jobs, increasing the size of the public sector by more than half.

The economy grew by about 1.5 per cent a year over the 1970s, nearly all of it due to this fiscal stimulus. This made Northern Ireland exceptionally dependent on the support from London, a situation which persists today.

In Great Britain itself, the 1970s and the 1980s saw deindustrialisation, fuelled by government policy, but overall the jobs lost were replaced by services jobs, selling to the wider world. Many of the new jobs were located around London. Northern Ireland has not really benefited from a corresponding scale of evolution of its business sector from manufacturing to market services.

The 1990s saw some success in the North’s local economy, with growth averaging 3 per cent a year, higher than in the UK as a whole. The fiscal transfer from London remained very large, but this did not explain the growth in the wider economy.

The ceasefire, followed by the Belfast Agreement in 1998, ushered in a new era for Northern Irish society and, potentially, for the economy. However, the 20 years since the signing of the Belfast Agreement have been a considerable economic disappointment. Since 1998, Northern Ireland has been the slowest growing region in the UK in terms of GDP per head, at 1.2 per cent a year.

In addition, the transfer from London actually increased from its average of 15 per cent of GDP a year between 1980 and 1998, to 20 per cent of GDP since then. When this fiscal injection is allowed for, the underlying growth in Northern Ireland in recent years seems even more anaemic.

The key symptom of the failure of the Northern Ireland economy in recent years has been the fact that there has been almost no growth in productivity. In turn, this reflects the reality that Northern Ireland has the lowest level of educational attainment of any UK region.

Unlike the rest of the UK, the selective nature of the post-primary educational system sees a large proportion of young people leaving school early. In addition, the limited pool of northern graduates has a high emigration rate.

As we discovered here, it takes a generation to achieve a major improvement in the education level of the workforce, but investment in human capital brings major long-term economic dividends. Unless there is urgent major reform to deal with in-built educational disadvantage in Northern Ireland, its economy is likely to continue to seriously underperform for decades to come.

1 Revenue publishes list of companies tapping State for wage support
2 How long can Government afford to keep State pension age at 66?
3 Trump vs Biden: Stakes are high for the Irish economy
4 107 jobs at risk as Broderick’s shareholder considers examinership
5 Will remote working become the norm?
6 Corporate America is breaking with Donald Trump
7 NatWest CEO declines to give timeline for Ulster Bank decision
8 Stripe moves payment processing to Dublin due to Brexit
9 ‘Going abroad forced me to challenge assumptions that I had’
10 Apple iPhone 12 Pro: Well worth the wait
Real news has value SUBSCRIBE