Two of those attacked are hospitalised while four in total injured, according to city police 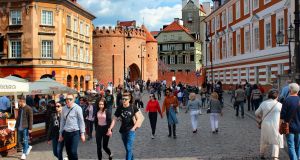 The group of Israelis were attacked about 5am on Saturday said a spokesman for the Warsaw police. File photograph: Getty Images

Poland’s foreign ministry on Sunday condemned violence against a group of Israeli students beaten at a Warsaw nightclub early on Saturday, following criticism that Polish leaders are not doing enough to denounce anti-semitism.

Earlier this year, the World Jewish Congress condemned the burning of an effigy of Judas in the Polish town of Pruchnik and hundreds of far-right supporters marching in Warsaw against a US law on restitution of Jewish property seized during or after the second World War.

Poland was home to one of the world’s biggest Jewish communities before it was almost wiped out by Nazi German occupiers who set up death camps such as Auschwitz on Polish soil.

The group of Israelis were attacked about 5am on Saturday said a spokesman for the Warsaw police. He added that two of those attacked were hospitalised while four in total were injured.

“We noticed some pushing and shoving and from the window we heard cursing,” Yotam Kashpizky, one of the students who was attacked, told Israel’s Channel 13 TV on Sunday, adding that his nose and eye socket were broken.

Kashpizky’s twin brother, Barak, condemned the attack in a Facebook post on Sunday, alleging the assault was carried out by a “group of Arabs”.

The police spokesman did not confirm the nationality of the attackers. – Reuters