BBC and ITV to hold leaders’ debates without Theresa May 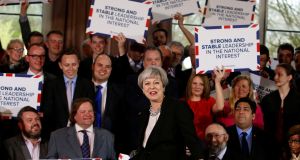 Britain’s prime minister Theresa May: “A general election will provide the country with five years of strong and stable leadership.” Photograph: Andrew Yates

The BBC and ITV have confirmed they will press ahead with televised leaders’ debates despite Theresa May’s refusal to take part. ITV said on Wednesday that Julie Etchingham, who chaired the network’s debate in 2015, would host another before the election on June 8th.

Jonathan Munro, the BBC’s head of news gathering, said the corporation wanted to work with other broadcasters to devise a plan for the debates which all parties would agree to.

“The BBC is working hard to make sure that there are leaders’ debates on the TV in the run-up to the general election because they are overwhelmingly in the public interest,” he said.

The prime minister confirmed on Wednesday morning, however, that she would not take part in any leaders’ debates during the seven-week campaign.

“I believe in campaigns where politicians actually get out and about and meet with voters. That’s what I have always believed in, it’s what I still believe and I still do it – as prime minister, as a constituency MP, I still go out and knock on doors in my constituency. That’s what I believe in doing, that’s what I’m going to be doing around this campaign,” she told the BBC.

Opposition MPs seized on the prime minister’s decision during a debate in the House of Commons to authorise an early general election. Liberal Democrat leader Tim Farron accused Ms May of cowering “behind the hard-right pages of the Brexit press” instead of presenting her case to the British people.

Introducing the motion to call an election ahead of the scheduled date in 2020 under the Fixed-Term Parliaments Act, the prime minister said the timetable of Brexit negotiations meant it was in the national interest to go to the polls now.

“A general election will provide the country with five years of strong and stable leadership to see us through the negotiations and ensure we are able to go on to make a success of the result,” she said.

Jeremy Corbyn said that Ms May’s reversal on calling an early election showed that she could not be trusted but Labour would support the motion because it welcomed the chance to face the voters. He said the prime minister and her government were holding Britain back.

“She talks about a strong economy, but the truth is that most people are worse off than they were when the Conservatives came to power seven years ago. The election gives the British people the chance to change direction,” he said.

The DUP’s Nigel Dodds said the election offered voters in Northern Ireland a choice about how they wished to be governed and their constitutional future.

“They will have a clear choice on whether to rally round and state firmly that they want Northern Ireland to remain part of the United Kingdom or to go down the route presented by Sinn Féin, whose Marxist-Leninist concept of a republic has been rejected even by most of those who accept its nationalism,” he said.

MPs approved the motion by 522 votes to 13, with Labour and the Liberal Democrats helping the government to secure the two-thirds majority it needed to call an early election. The SNP abstained and the SDLP and Independent Unionist Sylvia Harmon were among those who opposed the motion.

The SDLP’s Mark Durkan warned about the election’s impact on negotiations to form a new executive in Northern Ireland.

“First, it will probably colour the parties’ attitude to some of the issues we are dealing with, and it will certainly colour their attitude towards each other and their level of trust. Also, the British government will not be in a position to give undertakings or commitments in the context of those negotiations as purdah kicks in, so how will we get any sort of comprehensive agreement in such circumstances?” he said.