Access and aid key to humanitarian effort in northeast Nigeria 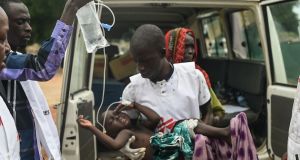 A child who has tested positive for malaria suffers convulsions after being treated in the MSF clinic. Photograph: Ikram N’gadi/MSF 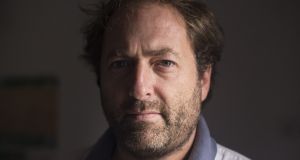 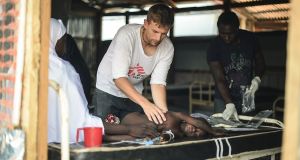 A child who has shown sign of measles with complications is treated in an isolation ward at General Hospital Camp in Damboa, Borno State. Photograph: Ikram N’gadi/MSF

The international community must “step up” and provide vital funding for humanitarian efforts in northeast Nigeria, where the devastation wrought by jihadist insurgents has left millions facing hunger and disease, an aid agency has said.

Jihadist group Boko Haram’s eight-year insurgency to carve out an Islamic state in northeast Nigeria has killed at least 20,000 people and forced some two million to flee their homes. Nearly five million people in the region are desperately hungry and are at risk from starvation this year if they do not receive food aid, according to figures from the United Nations.

The aid agency Médecins Sans Frontières (MSF), which does not accept government funding, has warned that malnutrition rates could rise dramatically across Nigeria’s Borno state without more foreign aid and better access to the worst-affected areas.

Henry Gray, an MSF emergency co-ordinator working on the Nigerian crisis, said that while many in Borno were able to plant and harvest in the most recent growing seasons, resulting in more locally produced food, aid workers expected the situation to worsen in the summer.

“We expect the hunger gap to tighten and for people to start running out of what they have been able to save,” he said.

The UN says it needs $1.5 billion (€1.4 billion) in humanitarian aid this year for the Lake Chad region – which spreads across parts of Nigeria, Niger, Cameroon and Chad – and $457 million had been pledged for 2017 by late February. Last week, the UN children’s fund said its response to the crisis “remains severely underfunded”, a warning echoed by many other aid groups.

The humanitarian response in Borno has been fraught at times due to tensions between the state and international aid agencies. In December, a government spokesman said aid agencies, including the UN, were exaggerating levels of hunger to get more funding from donors, while Borno’s state governor in January said many of the groups were profiting from the crisis. Both sides have been eager to stress that efforts are continuing to defuse these tensions.

Mr Gray, who was in Dublin to address the Oireachtas foreign affairs committee, said it was vital that foreign governments “step up” and meet their commitments while ensuring they did not divert money towards hunger relief from projects in areas such as malaria prevention or meningitis. “Otherwise people will start dying of measles or meningitis or cholera or malaria . . . Robbing Peter to pay Paul will not have a good outcome.”

Securing access to communities in Borno has been a persistent problem for aid workers. “It’s not just about cash. If you have all the money in the world, but you don’t have physical access to these places, then the money will still be spent but the populations won’t be reached,” said Mr Gray. “We need unrestricted access. When it is safe to go, we want to be able to go.”

“It’s very difficult to get a clear understanding of the scale of the problem when people are embedded in the community,” said Mr Gray. “The basics of food, water and sanitation and healthcare, really being stretched.”

The wet season has prompted tens of thousands of refugees to attempt to return home to farm, despite facing serious dangers, saying there is not enough food provided elsewhere to sustain them.

Local authorities in Maidiguri have also signalled that they will seek to reduce the refugee population there through enforced or incentivised relocation. MSF sees this as “a very dangerous potential development”, added Mr Gray.