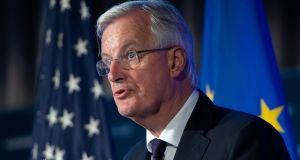 The European Union will assess the “workability” of the White Paper published by the British government today, Brexit negotiator Michel Barnier has said.

Speaking ahead of a meeting with Irish-American members of the US Congress in Washington on Thursday he said the White Paper would be assessed “in line with the guidelines of the 27 leaders of the EU and also to check the workability of this proposal”.

He also said the topic of his discussion with US lawmakers was to update them on “where we are” with the Brexit negotiations, in particular in issues related to Ireland.

Mr Barnier met about a half a dozen members of the Friends of Ireland caucus on Capitol Hill on Thursday, part of a two-day visit to Washington. The EU ambassador to Washington, David O’Sullivan, also attended the meeting.

Speaking after the meeting, Congressman Richard Neal said he had been “encouraged” by the discussion with the EU’s chief Brexit negotiator, who set out the EU’s negotiating position.

“His views were consistent with ours. That is, that there should be no return to a hard border,” he said. “We were very firm that there is not to be any backsliding on this.”

Mr Neal, who was centrally involved in US efforts to establish the peace process twenty years ago, said the issue of Brexit was being closely followed by himself and others on Capitol Hill.

“We highlighted during our meeting with Mr Barnier that the Northern Ireland peace process was one of the greatest foreign policy achievements of recent decades. In particular, I spoke about my own experience of crossing the border between Donegal and Derry thirty years ago on a bus with House Speaker Tom Foley and being searched by police. Two years ago when I crossed, my phone simply pinged.”

Mr Neal said it was imperative that progress is made on Brexit in the coming months.

“I think this is going to have to be shored up by the end of this year, that then leaves three months before the March 2019 exit date.”

He said that the White Paper published by the British government had been encouraging, as it signalled a willingness by the British Prime Minister to maintain a close relationship with the European Union.

Pennsylvania congressman Brendan Boyle said he was heartened by the solidarity shown by the other EU member states towards Ireland during the negotiations. “Ensuring that there is no return to a hard border is essential in these negotiations,” he said.

More than 30 members of Congress wrote to the US president and Secretary of State earlier this year, calling for a Special Envoy to Northern Ireland to be appointed, highlighting the risks posed by Brexit to the Northern Ireland peace process.

Mr Boyle said he was disappointed that Secretary of State Pompeo had shown no knowledge of the prior commitment of the State Department to consider the appointment of a Northern Ireland envoy, during questioning at a recent hearing of the House Foreign Relations committee.