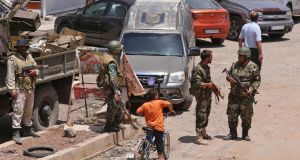 A Syrian child rides his bike after Syrian government forces recently recaptured the village of Ghariyah ash Sharqiyah from the rebels, in the province of Deraa. Photograph: AFP/ Youssef Karwashan/ Getty Images

Syrian official media on Monday reported that the country’s air defences had destroyed several Israeli missiles and hit a warplane attacking an airbase near Homs.

The Britain-based opposition Syrian Observatory for Human Rights said the attack, directed at “Iranian forces and pro-Assad militia”, caused fatalities when four or five missiles hit the base.

Israel has not commented on the operation. It conducted a raid in April on the Homs base, killing seven Iranian revolutionary guardsmen. Israel regards the presence in Syria of Iranian military personnel a major threat to its security and considers Iran its main regional enemy.

The air action coincided with a Syrian army victory over insurgents in the south and the return to their homes of tens of thousands of displaced civilians under a Russian-mediated ceasefire. More than 90 towns and villages have joined the ceasefire following two weeks of heavy aerial bombardment that displaced 330,000 people.

Although rejected by some factions of the opposition Southern Front, as well as Islamic State and al-Qaeda affiliates based in western Deraa province, the truce provides for an amnesty for insurgent fighters who lay down their weapons in order to stay in the south and evacuation for others to the northwestern jihadi-held Idlib province.

After shoot-outs erupted between Syrian troops and insurgents on Sunday, Russia decided to conduct the evacuation of 1,000 insurgents along a secure humanitarian corridor.

The truce also enabled government forces to resume control of the Nassib border crossing with Jordan, giving rise to Jordanian expectations that the kingdom’s 380km border could be stabilised and trade could soon restart.

Writing in the Jordan Times on Monday, regional expert Amer al-Sabaileh urged Amman to dismiss anti-Syrian hawks, revise its policy, and “reopen” dialogue with Damascus and Moscow in order to ensure security for southern Syria.

Sabaileh spoke for many Jordanians who have been uneasy with Amman’s connections with armed groups and powers seeking to topple Syrian president Bashar al-Assad, an effort that has brought chaos to Syria.

Since 2013 Jordan, reluctantly, hosted the not-so-secret US Central Intelligence Agency’s Military Operations Centre which, until late last year, recruited, trained, armed and advised “moderate” anti-Assad forces operating under the umbrella of the Free Syrian Army, rebranded as the Southern Front. This effort was scrapped because front members fought each other rather than Syria.

Aware that the front cannot resist the Syrian army’s offensive, begun on June 19th, Jordan has played a proactive role in the search for a truce and “reconciliation” deals with Damascus. Its efforts demonstrate Amman has recognised the inevitable return of government rule to the south and has begun to adjust its policy.

During recent fighting, Amman has flatly refused to allow displaced Syrians to cross into Jordan, a country with few resources which already hosts 1.3 million Syrians, 657,000 of whom are dependent on UN relief. Some 60,000 became stranded near the Nassib border crossing without shelter, water and food, which the Jordanian army provided while urging the recipients to go home.

On Sunday only 150-200 remained. Syrians fearful of arrest or army conscription have moved to western Deraa province or Quneitra province to seek Israeli protection.