What do you think is the ‘creepiest’ occupation? 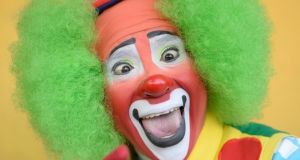 Do you think clowns are ‘creepy’? Photograph: Johan Ordonez/AFP/Getty Images/Files

Some occupations are creepier than others, according to new research published in the Journal New Ideas in Psychology last month.

Creepiness is hard to define and study, but researchers at Knox College, Illinois, USA, have attempted just that.

The theory goes that feeling “creeped out” has to do with an evolutionary response of vigilance to an ambiguous situation where there’s no clear threat.

The study uses the example of becoming on-edge when we hear a noise down an alleyway; though we can’t see an attacker, we err on the side of caution and focus attention on the alley.

For this study, 1,345 people were surveyed about creepiness.

It also found that some hobbies and jobs are creepier than others.

Below is a list of 14 occupations ordered by their perceived creepiness -  vote for the one you consider the creepiest.

You can compare your answer with the researchers' list at the bottom of the page.

What the survey found: The study presented a list of 21 jobs total, some of which were considered considerably less creepy than others. The top 14 were ranked:

Further down the list were; cafeteria worker; financial adviser; doctor/physician; college professor; farmer; teacher and meteorologist, though many of those scored an average below 2 on the “creepiness scale”.

Is there anything creepier that was not mentioned in the study? Let us know @irishtimes