Amber Rudd, the high profile ex-work and pensions secretary has quit Boris Johnson's Cabinet, with an outspoken attack on the way the government is managing the Brexit process. Video: BBC / Andrew Marr Show 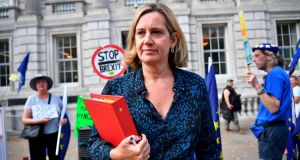 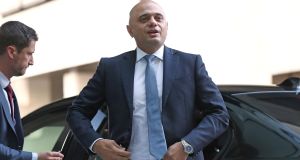 Britain’s chancellor of the exchequer Sajid Javid arrives at the BBC for the Andrew Marr show on Sunday. Photograph: Yui Mok/PA 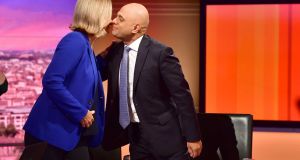 Amber Rudd said she sensationally quit the British cabinet and the Conservative party on Saturday night because there was not enough evidence of attempts to find a Brexit deal with the European Union.

Speaking on the BBC’s Andrew Marr Show on Sunday, the former work and pensions secretary said she was shown a “one-page summary” when asked for evidence of Boris Johnson’s government’s work in negotiating a deal with the European Union.

She said: “I have not seen enough work going into to actually trying to get a deal. When I asked Number 10 for a summary of what the plan was for actually getting a deal, I was sent a one-page summary.”

The MP quit her post and said she was relinquishing the Tory whip after the British prime minister sacked 21 rebels this week. Mr Johnson removed the whip from two former chancellors and Winston Churchill’s grandson after they voted to give opposition MPs control of the order paper and start the process of blocking a no-deal Brexit.

“I have spoken to the PM and my Association Chairman to explain. I remain committed to the One Nation values that drew me into politics.”

In comments likely to reverberate across Westminster as it gears up for another tumultuous week, Ms Rudd said she thought a no-deal Brexit was now the British government’s main aim.

Britain’s foreign secretary Dominic Raab said he was “really sorry” to see Ms Rudd leave the cabinet. He told Sky News’s Sophy Ridge on Sunday: “I’m really sorry to see Amber step down, I like her, I respect her.

“We became MPs at the same time in 2010, but I think in fairness when she took the cabinet role everyone was asked ‘do you accept and can you sign up and will you support the prime minister’s plan to leave by the end of October preferably with a deal, but if not come what may’ and we all accepted that.

“I think the prime minister was right to restore some discipline and I think he’s right to expect it from his top team.”

He added: “It’s been a rough week, but the reality is the prime minister is sticking to his guns on what he said to get us out of this rut that we’re in.”

Chancellor of the exchequer Sajid Javid told the Andrew Marr Show that a no-deal exit was not “ideal” but that the British government could mitigate against the worst of its disruption.

He said: “No-one has ever pretended that no-deal is an ideal outcome.

“Even if we have no-deal, we would quickly have to get round the negotiating table. It would not be the long-term solution.

“But it is an outcome, I think, where we could keep disruption to a minimum.”

Mr Javid refused to rule out a pact with the Brexit Party in a general election, telling the BBC that the Conservative Party does not “need” electoral alliances.

He was asked by Marr whether he would personally feel comfortable standing next to Nigel Farage after striking an election deal. Mr Javid said he supported holding a general election despite “sad” timing, saying: “We absolutely now need an election. It is being forced on us because Parliament is trying to kneecap these negotiations.”

He was then repeatedly asked to publicly rule out a pact with the Brexit Party, which Mr Johnson is believed to have privately ruled out. He told the BBC: “We don’t need an electoral alliance with anyone. We can stand on our own two feet, put our message across.

“The picture our opponents are painting of us, of course they would paint a false picture. We are a proud centre right, moderate, one nation party.

“There is nothing extremist about wanting to meet the will of the British people on a simple question which was do you want to leave the EU or not.

“We are not in election yet. I am clear we do not need an alliance with anyone.”

Text on the Tube

Former Conservative cabinet minister and independent Justine Greening said: “For me it’s impossible to stand by and simply allow a government to inflict a no-deal Brexit on Britain, for me it is the most profoundly un-Conservative policy I have ever seen, it destroys jobs, it harms our economy, it damages opportunity, it will damage social mobility.”

On Ms Rudd’s departure, she told Sky News’s Sophy Ridge on Sunday: “She’s been clear that there isn’t really a negotiation going on with the EU to try and get any kind of Brexit deal and, from my perspective, I’m waiting to see the Prime Minister get on a plane to Brussels.

“That’s not happened yet and so my concern’s always been that there isn’t really a negotiation happening on Brexit now and therefore the main objective of the Government is to leave with no-deal.”

Ms Greening revealed she received news of having the whip withdrawn by voicemail from the chief whip while travelling home on London’s Tube.

She told Sky News: “I think it might have been polite after 14 years to try to call me back perhaps a second time ... I think it says an awful lot more about, I guess, the state of the Conservative Party than it does about me.

“I think in a way, I have served my community and my country for 14 years and I think it’s a shame that the whip has been withdrawn for me doing the simple thing of representing my community in Parliament.”

The devout Liverpool FC fan backed Remain during the EU referendum in 2016. Her predecessor Ms Rudd resigned after suggesting the Government was aiming to take the UK out of the EU without a deal. - PA