Tesla driver was travelling on highway in Alberta at 150km/h 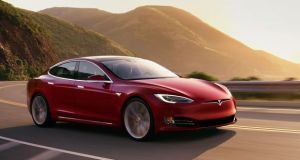 Police they received a complaint that a Model S Tesla vehicle was speeding on the highway near the town of Ponoka.

Police in Canada have charged a man with speeding and dangerous driving after he was found asleep at the wheel of his self-driving car as it travelled at 150km/h down a highway in the province of Alberta.

Announcing the charges on Thursday, the Royal Canadian Mounted (RCMP) police said that on July 9th they received a complaint that a Model S Tesla vehicle was speeding on the highway near the town of Ponoka.

“The car appeared to be self-driving, travelling over 140km/h, with both front seats completely reclined and both occupants appearing to be asleep,” the RCMP said in a statement.

After the police flashed their lights, however, the Tesla electric vehicle reportedly sped up to “exactly” 150km/h, according to police. The speed limit on most of Canada’s highway network is 110km/h.

The driver, a 20-year-old man from neighbouring British Columbia, was charged with speeding and given a 24-hour license suspension for driving while fatigued.

The province has also decided to charge the driver with dangerous driving, and he is due to appear in court in December.

The proliferation of self-driving vehicles, pioneered by the electric car company Tesla, has posed a challenge for regulators trying to determine the safety and effectiveness of the on-board systems.

In January, an Ontario driver was charged with reckless driving after officers spotted him using both hands to floss his teeth as his vehicle sped along the highway at 135 km/h.

Two months earlier a Tesla vehicle was spotted driving on the wrong side of the road - without a driver.

And in the United States, officials are investigating a number of fatal crashes involving the “autopilot” function, including one in which the driver was using the feature to play on his phone.

“Although manufacturers of new vehicles have built-in safeguards to prevent drivers from taking advantage of the new safety systems in vehicles, those systems are just that - supplemental safety systems,” RCMP superintendent Gary Graham said in the statement. “They are not self-driving systems. They still come with the responsibility of driving.”–Guardian