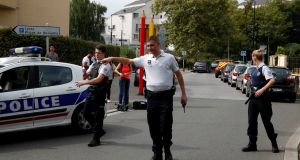 French police secure a street after a man killed two persons and injured an other in a knife attack in Trappes, near Paris. Photograph: Philippe Wojazer/Reuters

A man was shot dead by French police on Thursday after he killed his mother and sister and seriously wounded a female passerby in Trappes, 33km southwest of Paris.

Islamic State claimed responsibility for the murders, but the French interior minister Gérard Collomb said the killer “had major psychiatric problems” and appeared to be “unstable” rather than “someone who . . . could obey orders from terrorist organisations, and from Da’esh in particular.”

Da’esh is the Arabic acronym for Islamic State, also known as Isis.

The killer was identified as Kamel Salhi (36). He figured on the French “S” and FSPRT lists for suspected Islamist militants. In 2016, Salhi was charged with “defending terrorism” but let off for insufficient evidence.*

A local official in Trappes told France Info radio that Salhi “was known to police for being psychologically fragile and for having problems in his relationship”.

Salhi fatally stabbed his sister, then attacked a woman with no apparent connection to the family, on the pavement outside, at about 9.30am. Several witnesses said he shouted “Allah Akbar” before running into his mother’s house and killing her.

“He came back out with a knife and despite police warnings he continued advancing,” Mr Collomb said. “So they shot him and he died.”

The attack occurred after the release on Wednesday night of the first recording by Abu Bakr al-Baghdadi, the leader of Islamic State, in a year. Events referred to by al-Baghdadi made it clear the recording was done about two weeks ago. He said attacks by followers are still “blessed” and that “actions in the West are worth 1,000 operations” in Iraq or Syria.

Islamic State lost the cities it held in Iraq and Syria last year, but has recently stepped up attacks in Iraq again. Al-Baghdadi was repeatedly reported to have been killed.

Islamic State’s “news agency” Amaq claimed responsibility for Salhi’s actions. The jihadist group used to record videos in which its “soldiers” declared allegiance to Islamic State before they committed atrocities.

The credibility of Islamic State’s claims of responsibility was seriously damaged when it attempted to take credit for the shooting dead of 58 people in Las Vegas last October 1st. The killer, a retired white man called Stephen Paddock, was never found to have any links to Islamist militants.

Islamic State also said it was responsible for the deaths of 86 people on the Promenade des Anglais in Nice on July 14th, 2016. No connection was ever established between the jihadist group and the Tunisian who mowed down pedestrians in a refrigerated lorry.

Islamic State may seek to instill fear and increase its prestige among followers by claiming attacks it has nothing to do with. But it may also be in the interest of western governments to dismiss attacks they might have prevented as the work of deranged loners.

The investigative weekly Canard enchaîné reported on Wednesday that a French judge mistakenly freed a terrorist suspect called Oualid B. in April.

1 Production at Brady’s Ham plant in Kildare stops after 80 staff test positive for Covid-19
2 How a ship abandoned by its owner brought deadly cargo to Beirut
3 Officials refuse to rule out ‘Midlands lockdown’ following Covid-19 surge
4 Masks Q&A: Who has to wear them in shops and what happens if you don’t?
5 Well-known figures in Irish soccer arrested over €3m heroin haul
Real news has value SUBSCRIBE