Alex Salmond declines to appear before inquiry after evidence redacted 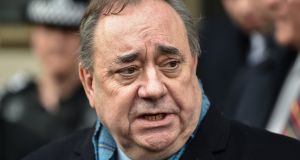 Former Scottish first minister Alex Salmond claims that figures close to first minister Nicola Sturgeon tried to damage his reputation and remove him from public life and that the first minister misled parliament about what she knew about it. Photograph: Jeff J Mitchell/Getty Images

Former first minister of Scotland Alex Salmond has withdrawn from a planned appearance on Wednesday before a parliamentary committee looking into how Nicola Sturgeon’s Scottish government handled sexual harassment allegations against him after his written evidence was redacted.

Mr Salmond claims that figures close to Ms Sturgeon tried to damage his reputation and remove him from public life and that the first minister misled parliament about what she knew about it.

The parliamentary committee on Tuesday cut parts of Mr Salmond’s written submission which it had published on its website a day earlier after the Crown Office, Scotland’s prosecution service, expressed “grave concern” about some of his allegations. Mr Salmond’s legal team said the redactions “created a significant legal impediment to his oral evidence”.

The Scottish government’s investigation into sexual harassment complaints against Mr Salmond led to a £500,000 legal bill after a judicial review found it to have been “tainted by apparent bias”. He was later charged with 13 counts of sexual assault but was acquitted of all charges in court last year.

While the parliamentary committee is looking into the Scottish parliament’s handling of the original complaints against Mr Salmond, Irish barrister and former DPP James Hamilton is conducting a separate investigation into whether Ms Sturgeon broke the ministerial code.

In his submission to Mr Hamilton, Mr Salmond claims that the first minister misled parliament about meetings they held at her home, breaching the ministerial code.

In his written submission to the parliamentary committee, he named a number of leading figures in the Scottish National Party (SNP) whom he claims were part of an effort to damage him.

“It has been a matter of considerable public interest whether there was ‘a conspiracy’. I have never adopted the term but note that the Cambridge English Dictionary defines it as ‘the activity of secretly planning with other people to do something bad or illegal’,” he said.

“I leave to others the question of what is, or is not, a conspiracy, but am very clear in my position that the evidence supports a deliberate, prolonged, malicious and concerted effort amongst a range of individuals within the Scottish government and the SNP to damage my reputation, even to the extent of having me imprisoned.”

He criticised the civil service, the Crown Office and the lord advocate, Scotland’s chief legal officer, alleging that the prosecutor’s office is not fit for purpose.

“The real cost to the Scottish people runs into many millions of pounds and yet no one in this entire process has uttered the simple words which are necessary on occasions to renew and refresh democratic institutions: ‘I resign.’ The committee now has the opportunity to address that position,” he said.

Ms Sturgeon, who is due to appear before the committee next week, has denied misleading parliament and accused Mr Salmond of making allegations without any evidence to back them up.

“He appears to be suggesting some kind of conspiracy or concerted campaign against him without a shred of evidence. This is his opportunity, because the burden of proof lies with him, to replace the insinuation and assertion that we’ve heard over several months now with evidence. Now I don’t believe he can do that because I know what he is claiming about a conspiracy is not true,” she said.