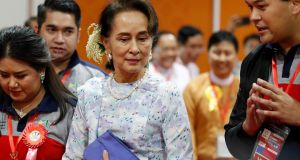 Aung San Suu Kyi will lead a team to The Hague to “defend” Myanmar against accusations of genocide, putting the country’s de facto leader at odds with international efforts to hold her country to account for the alleged atrocities committed against the Rohingya Muslim minority.

Aung San Suu Kyi’s decision to become personally involved in the lawsuit at the International Court of Justice risks further reputational damage for the former political prisoner, who has drawn heavy external criticism over her response to the military crackdown in western Myanmar.

A Hague appearance would also be dramatic after judges at the separate International Criminal Court, also based in the Dutch city, last week authorised prosecutors to investigate possible crimes against the Rohingya.

Zaw Htay, Myanmar’s government spokesman, said Aung San Suu Kyi would travel to the Netherlands to battle the accusations made to the ICJ, the UN’s top court.

“Myanmar has retained prominent international lawyers to contest the case,” he wrote on Twitter, adding that she would “defend the national interest of Myanmar at the ICJ”.

The west African country of Gambia, acting on behalf of the Organisation of Islamic Co-operation, last week filed an application to the ICJ to open a genocide case against Myanmar in connection with a military campaign in Rakhine state in 2017-2018. The clampdown killed many thousands and drove more than 700,000 people into exile in Bangladesh.

The ICJ has the authority to rule that Myanmar bears responsibility for genocide against its own people, in what would be a ringing statement on accountability and a disastrous blow to the already severely damaged standing of Aung San Suu Kyi. The former political prisoner took power in 2016 at the helm of the first civilian-led government in more than half a century, although the military retains huge formal and informal powers.

Richard Rogers, a partner in Global Diligence, a London law firm, said it was both unusual and risky for a top politician to personally travel to The Hague at this stage of an ICJ case.

“It does not look like a good idea,” he said. “I do not think it is going to help Myanmar’s case, and it could possibly hurt it if they are seen as inappropriately attempting to lobby the court.

“And for Suu Kyi personally, it could give the impression that she is defending the alleged genocidal acts that the court must assess.”

The ICJ did not immediately respond to a request for comment.

Aung San Suu Kyi has attracted international condemnation and been stripped of numerous honours overseas for failing to come to the defence of the Rohingya in the face of growing credible evidence of mass killings, rapes and forced displacements.

The ICC, which is responsible for prosecuting genocide, war crimes and crimes against humanity, is investigating alleged deportation and persecution of Rohingya. While Myanmar is not signed up to the ICC, prosecutors are able to probe suspected crimes against people who fled to neighbouring Bangladesh.

A UK-based Rohingya activist launched a further case last week in a lawsuit in Argentina alleging genocide and crimes against humanity, in the first proceedings to target Aung San Suu Kyi. The Argentine case was brought using so-called universal jurisdiction, under which crimes allegedly committed in one country can be tried in another.

Myanmar’s government and Aung San Suu Kyi have denied wrongdoing. They have portrayed the crackdown as a legitimate response to attacks carried out by Rohingya insurgents from 2017. – Copyright The Financial Times Limited 2019