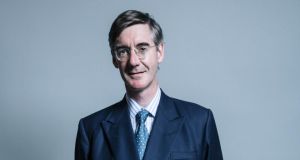 Jacob Rees-Mogg has accused Ireland and the European Union of risking a “no deal” Brexit with their “absurd” suggestion that Northern Ireland be in a common regulatory area with Brussels to avoid a hard border on the island.

The leading Tory Brexiteer blamed “irresponsible, vote-chasing immaturity” from Taoiseach Leo Varadkar and “clear disregard” for the Belfast Agreement from the EU’s chief negotiator, Michel Barnier, for the row about the Border.

The Conservative MP said it was clear a solution cannot be found to maintain a soft border until the UK and the European Union have finalised their future trading relationship.

Theresa May, the British prime minister, has already rejected the EU’s demand, arguing it would threaten the constitutional and territorial integrity of the United Kingdom by keeping Northern Ireland in a de-facto European customs area that the rest of the country would be outside.

Ms May has instead called for either a customs partnership, under which the UK would mirror EU requirements on goods from around the world, or a streamlined customs arrangement, using technology and “trusted trader” schemes to do away with the need for customs checks.

Writing in the Belfast News Letter, Mr Rees-Mogg praised Ms May for rejecting Brussels’ demands “firmly and unalterably”. He said: “The thing she said no to was the egregious act of aggression by the European Commission, under its lead Brexit negotiator Michel Barnier, that a friendly European state should be dismembered at its behest.

“This will not happen. Our union has endured rather more unpleasant threats than a policy paper out of Brussels which the Prime Minister has rightly rebuffed. But the presumption of Brussels in even proposing this is an unfriendly act.”

He went on: “Then there is the further problem in what this absurd suggestion – that the Province should be detached from the rest of the country and become a protectorate of Brussels – in fact means.

“It means that Brussels is still not being serious, and that vital voices in Europe actually seem to want a ‘no deal’ Brexit. For it can be inescapable now for everyone in Europe that no deal could ever seriously be contemplated on these preposterous terms. So why even suggest them unless no deal is your objective?”

Mr Rees-Mogg also attacked Mr Varadkar. He wrote: “I cannot see how it is in the Republic’s interests for its current prime minister, Leo Varadkar, to posture in this way, not least by endorsing the fantasy proposals of Michel Barnier this week, which would do such comprehensive harm to the Belfast Agreement and risk No Deal, which would be more damaging to the Republic’s economy than to any other European state.”

The Labour Party leader, Brendan Howlin, has meanwhile called on the Taoiseach to clarify remarks about his position on Brexit that Ms May made in her speech on Brexit on Friday.

Mr Howlin said: “Specifically, Ms May indicated that she and the Taoiseach agreed that both countries, Ireland and the United Kingdom, would work alongside the European Commission on a solution for the Irish Border question.

“In effect, Ms May is suggesting that the Taoiseach has taken on a shared responsibility to find a solution to the impossible conundrum that May and her Government have created.”

He said: “If accurate, Ms May’s statement represents a significant departure from the previous Irish Government position, which was that it was up to the UK government to resolve the problem that it alone was causing.” – PA