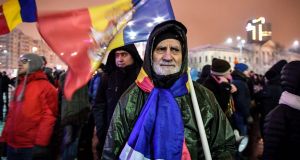 Protesters against corruption this week outside the Romanian government headquarters in Bucharest. Photograph: Daniel Mihailescu/Getty

Romanians rallied across the country and abroad on Sunday to denounce government attempts to sack the nation’s top anti-corruption prosecutor and pursue reforms that could benefit scandal-plagued politicians from the ruling party.

Thousands gathered on a snowy evening in the capital, Bucharest, and smaller protests took place in other cities and outside Romanian embassies, including in Dublin, in the latest round of demonstrations against the governing Social Democrats (PSD).

Justice minister Tudorel Toader sparked the protests by calling last week for the dismissal of Laura Codruta Kovesi, for allegedly exceeding her powers as head of Romania’s national anti-corruption directorate (DNA). The DNA has been highly praised by international experts for prosecuting numerous deputies, ministers and two ex-prime ministers for alleged wrongdoing in recent years, but Ms Codruta Kovesi has made powerful enemies along the way.

Delivering a 36-page report on Ms Codruta Kovesi’s running of the DNA, Mr Toader accused her of abusing her authority, defying parliament and challenging rulings from the constitutional court. “For these acts, and facts that are intolerable under the rule of law, I am starting the procedure to remove the chief prosecutor of the DNA,” he declared.

Romanian president Klaus Iohannis immediately came to the defence of Ms Codruta Kovesi, however, and only he has the legal power to dismiss her. “There haven’t been solid reasons unveiled by him, in order to allow a decision to dismiss [her],” Mr Iohannis said.

“Yes, I do support Kovesi. I do back her activity and I do back the DNA activity. They do a very good job,” he added, while noting that he “did not like the [justice] minister’s performance.” Mr Iohannis’s office said in a statement that due to his disagreement with Mr Toader over Ms Codruta Kovesi’s work, and a lack of clarity in the minister’s case against her, a special department of the presidency would now study the matter.

There is widespread scepticism in Romania about the motives of the ruling party and its leader, Liviu Dragnea, who is barred from holding high office due to a vote-rigging conviction and was accused last November of alleged fraud.

Several of his allies also have corruption convictions or are under investigation, and could benefit from government efforts to weaken anti-graft law, which last year triggered Romania’s biggest protests since its 1989 revolution.

The government is also at odds with the EU over a bid to tighten political control over Romania’s judiciary, which is reminiscent of reforms pushed through by Hungary and Poland that are widely seen as threats to the rule of law. “Yes, we know that the DNA is very annoying to those who steal Romanians’ money and want to live quietly with it,” said one protest group, Corruption Kills, in urging people to join Sunday’s protest.

“We will not give up, we will not accept abuse by a gang of crooks,” the group added, saying the demonstration in Bucharest – called “Tudorel, you go with your thieves!” – would take place outside government headquarters and demand the resignation of Mr Toader.