Disparaging comments sent from debate on Budapest, Warsaw and the rule of law 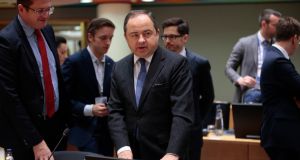 Hungary and Poland were on Tuesday fighting a rearguard action on two fronts against fellow EU member states’ attempts to find ways of sanctioning breaches of the rule of law by both countries.

The EU’s general affairs council, made up mainly of European affairs ministers of the member states, was holding hearings against both countries under the procedure for disciplining wayward states known as article 7.

Evidence was heard of what EU justice commissioner Didier Reynders called “negative evolutions in the last weeks and months since the last discussions”.

And Poland was fighting a battle in the budget debate against new rules to link payouts to observance of the rule of law.

Matters were made worse for the Hungarians when the Finnish presidency told ministers during the meeting that a member of the Hungarian delegation was tweeting a running commentary on the debate with disparaging comments about ministers and commissioners.

Hungarian government spokesman Zoltan Kovacs had referred to commissioners sneeringly as “George Soros’s orchestra”, a comment widely characterised as anti-Semitic, and made slighting comments about a number of member states including Ireland for their interventions.

The Finnish presidency described the language and the tweet – itself a breach of treaty obligations to confidentiality – as outrageous and demanded a written explanation from the Hungarians.

Ireland, represented by Ambassador Declan Kelleher, contributed to the rule of law discussion, expressing concerns about academic freedom, specifically the forced departure of the Central European University from Budapest to Vienna.

Belgium, France, Denmark, Sweden, Luxembourg, the Netherlands, Germany, Italy, Slovenia and Spain also raised concerns over the issues being discussed: press freedom, the independence of the judiciary, and academic freedom.

Ministers also heard a further discussion under article 7 of the state of play in Poland, where “reforms” of the judiciary are seen as undermining its independence.

Poland was also central to the deadlocked discussion of the union 2021-2027 budget, the multiannual framework or MFF. The Finns presented their “negotiating box”, putting proposed compromise figures on key elements of the deal. It now goes to the leaders at the summit in Brussels on Thursday, but little concrete is expected and they will hand on the challenge of brokering a deal to new president of the European Council, Charles Michel. He is expected to call a special summit in February devoted to the budget.

One of the challenges will be to agree language on what is known as “conditionality” – the attempt by the Finns to link budget payouts to respect for the rule of law. Poland in its response to the Finnish box makes clear that it distrusts the proposed mechanism, seeing it as another tool for interfering in what it regards as its internal affairs.

“Conditionalities should neither be used to harmonise laws in the EU nor be a substitute of infringement procedures,” the Polish paper on the MFF warns. “There is a serious risk that the mechanism might become a tool to exert unjustifiable political pressure on democratically elected governments.”

Although the budget is agreed by unanimity, changes to regulations covering it may be agreed by qualified majority – so Poland may yet have to accept some form of conditionality.