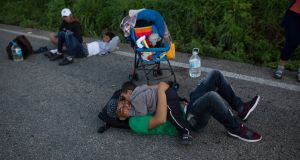 Central American migrants Santiago Mardoqueo, 19, plays with his son, Carlos (2), while taking a break as they make their way to Pijijiapan, Mexico, with a caravan to the US. Photograph: AP Photo/ Rodrigo Abd

US president Donald Trump will dispatch more than 800 US troops to the border with Mexico in anticipation of the advance of a “caravan” of migrants moving north from Central America, ramping up his anti-immigrant policies and rhetoric with less than two weeks left before the midterm elections.

According to CNN, Jim Mattis, the defence secretary, was preparing to sign deployment orders for the additional troops, who would provide “fencing, wall materials and other technical support” but would not engage in “lethal operations”. The Pentagon did not respond to a request for comment.

The move by the Trump administration is a sign that the White House views the attempt by several thousands of migrants to travel, mainly on foot, towards the US from countries such as Guatemala and Honduras as an opportunity to rally the Republican base ahead of the November 6th vote.

The group of migrants recently crossed into Mexico but could not plausibly reach the US border until at least next week. In a tweet on Thursday, Mr Trump blamed “Democrat-inspired laws” for making it hard for US authorities to stop people attempting to make the crossing. “I am bringing out the military for this National Emergency. They will be stopped!” he said.

Later, he doubled down with another post: “To those in the Caravan, turnaround, we are not letting people into the United States illegally. Go back to your Country and if you want, apply for citizenship like millions of others are doing!”

Republican candidates for Congress – some of whom are facing tough re-election battles in swing districts – have been seizing on the “caravan” as a key campaign issue, as they search to reverse the gap in voter enthusiasm with Democrats that is threatening their control of the House of Representatives.

They have echoed Mr Trump’s unsubstantiated claims that the group of migrants includes dangerous criminals and people from the Middle East who could pose a threat to US security, and backed the president’s call to cut aid for the Central American countries that had not prevented their citizens from leaving.

The handling of the migrant caravan has been a source of heated debate within the upper ranks of the Trump administration, even leading to a shouting match between John Bolton, the head of the National Security Council, and John Kelly, the White House chief of staff, according to reports in US media.

During the 2016 presidential election campaign, Mr Trump vowed a massive crackdown on immigration from and through Mexico, pledging to build a wall at the border and promising that Mexico would pay for it – a commitment that he has been unable to maintain. This has put pressure on Mr Trump and Republican law-makers to prove their hardline mettle on immigration heading into the 2018 vote. – Copyright The Financial Times Limited 2018